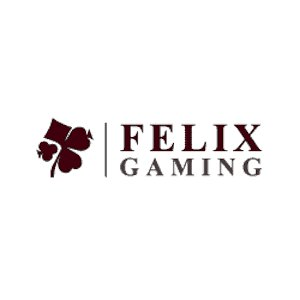 Felix Gaming is a software developer that focuses on producing online slots for a number of online casinos. They came out of the blue in 2017 after it was announced that they had formed a partnership that would see their small selection of slots hosted exclusively at SlotsMillion Casino.

We can only assume connections allowed for this fast-tracking of their talents. Felix Gaming themselves state on their website that they are made up of just three guys that have a combined 15-years of experience working in the gaming industry.

At the time of that partnership, they had just four slot games in their portfolio. Since then, however, they have trebled that and have started to be a lot more prolific. This is probably down to that early exposure with SlotsMillion that has led to further partnerships with a handful of other online casinos.

You will be hard-pressed to find out too much information about Felix Gaming as even their website does not give too much away. We could not find a phone number, a specific location in the UK, or whether they have any kind of licensing. For the latter, we have read that motions are in play for three different regulatory authorities.

So far, Felix Games has only produced video slots and not much else. There are no progressive jackpot slots to date, or live dealer games, or standard classic table games. Slots are where their core focus seems to lie and why not? These are the most popular types of online games at the casinos.

Their selection is still quite small with just a dozen titles but this is not such a bad outlay for a company just two years in. in fact, their output has increased in recent months due to their exposure toSlotsMillions.

As for the games in their catalogue, it would be fair to say that they are not at the same level as top producers such as NetEnt, Betsoft, Playtech and the like. Still, it would seem that the slots they have produced have been received well enough by players.

Graphically their slots are fairly average but in a market where mobile devices have become the majority instead of the minority, graphics and animations are not really as important as they once might have been. Instead, they try to focus on creating a gameplay experience that is enjoyable which can be used across multiple types of devices.

As for the types of slots that Felix Gaming creates, these are all video slots.Whenthey first burst onto the scene, almost all of their slots had 5-reels and between 10 and 20 pay lines and nothing too fancy in the way of features. Since then they have tried to offer up a bit more variety. Some are full of lucrative features while they already have their first 243-ways-to-win slot in ‘Light Dance’.

‘Dark Mystic’ is probably their most successful slot to date and it does showcase their obvious abilities as a software developer. It has pretty good graphics, some good animations but more importantly, a number of good bonus features. Those features on this 5-reel, 10 pay line slot include cascading symbols, wilds, wild reels, and reel respins.

‘IT’s a Joker’ is another popular slot from Felix Gaming and mostly because it has somewhat reinvented the 3-reel slot machine. Visually it looks good but where this really stands out is the two blocks on either side of the reels. To the left, you can spin in between 1 and 5 free spins on any given spin. To the right, each spin will give you a different win multiplier that could go as high as 25x.

Felix Gaming is certainly still a bit of a mystery but we actually find that quite intriguing. What will come next from them? Will they ever reveal themselves? These are questions that we look forward to finding out. Their games are pretty decent too so we can at least enjoy playing them even if we have no idea who made them.

They have their exclusive partnerships in place and obviously feel that they do not need to overmarket themselves. They can just go quietly about their business of developing their next line of enjoyable video slots.