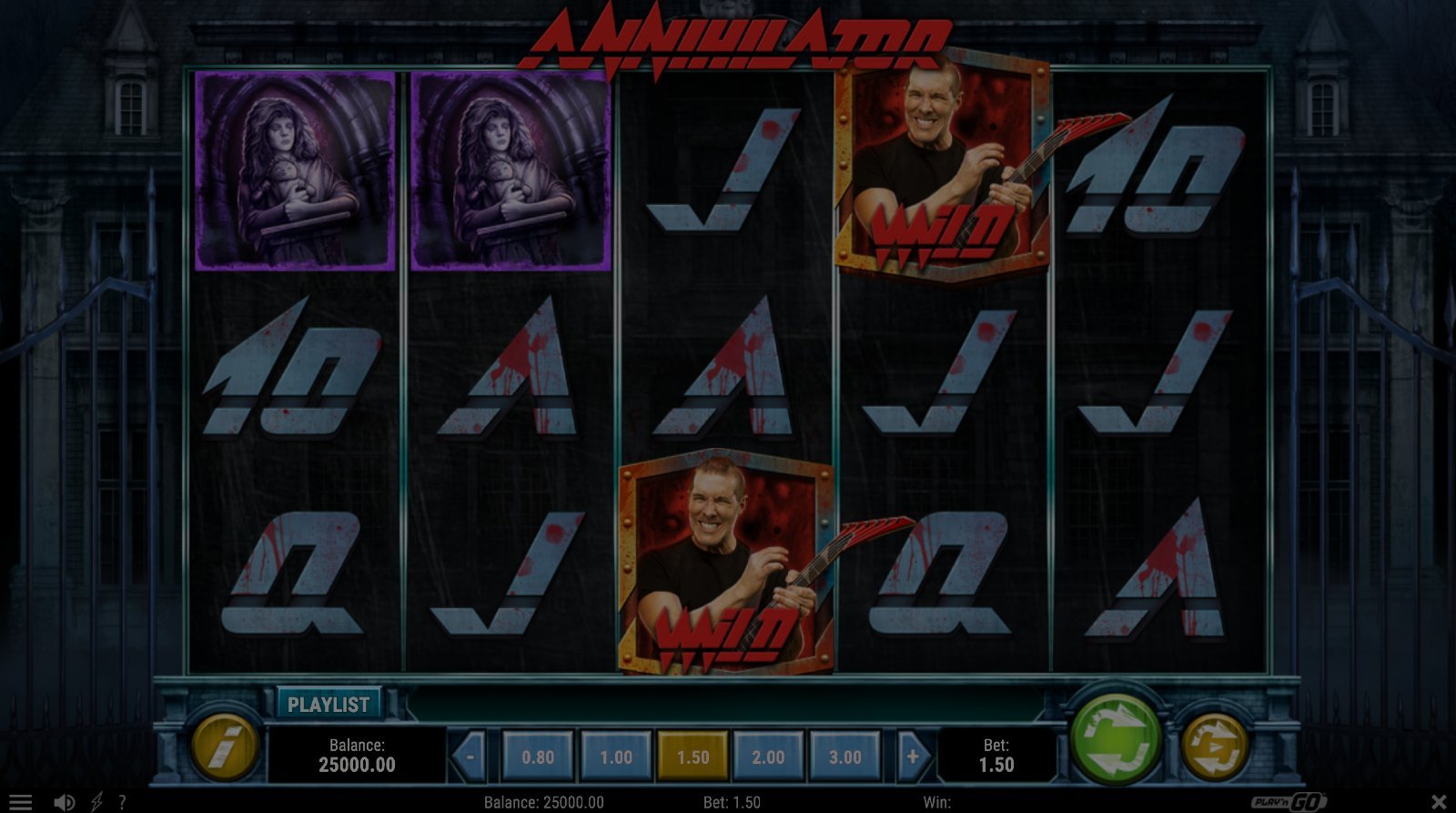 Fans of the Canadian thrash metal band Annihilator will be ecstatic with this online slot from Play’n Go. Roll the reels with guitarist Jeff Waters and vocalist John Bates while listening to some of their top soundtracks. Spin in cash wins with wild reels, expanding wilds, free spins, a pick me bonus spin bet multiplier game, and re-spins giving you the chance to win 5,000x your spin bet!

The slot is themed on the Canadian thrash metal band – Annihilator. A small playlist of the band’s best songs will play out while you roll the reels spinning in symbols that represent death, destruction, evil, and Satan.

The Annihilator video slot uses dark colours to mimic the band’s image of death, destruction, and Satanic behaviour. The wild symbol is the most impressive graphic. It is an animated wildcard symbol of Jeff Waters thrashing on his guitar which comes to life each time he links up symbol combinations. Other symbols also have animations such as Satan who appears on the reels with the fires of hell burning all around him. All the symbols, animations, and special effects on the Annihilator slot are brilliant, plus as a bonus for fans of this band, the theme tune uses music from the albums released by Annihilator.

The Annihilator online slot has 5 reels, with 3 rows and 10 pay lines of thrash metal action complete with free spins, a pick me bonus game, expanding wilds, and re-spins. With 2 bonus features to trigger there are 2 sets of scatters plus there is a wildcard symbol which is guitarist Jeff Waters.

Regular symbol combinations can use the wild to complete their combination or extend the number of symbols, so you land bigger spin bet multipliers. Landing 5 wildcards on a pay line will pay out 40x your spin bet, while the next symbol down from this is a purple icon that pays 30x, 6x, or 1.5x the spin bet for 5, 4, or 3 on the reels.

Fun Palace: Land 3 bonus symbols on reels 2, 3 and 4 to enter the ‘Fun Palace’ bonus pick me game. Choose doll symbols to collect x1, x2, x3 or x5 multipliers of the spin bet. The bonus will continue to give more picks and only ends when you reveal a x10, x15, x20, x25 or x50 spin bet multiplier. Also, if you reveal a scatter, the bonus ends and instantly triggers the ‘Set the World on Fire’ bonus.

Set The World On Fire Free Spins: There are 2 ways to trigger 8 free spins. Either land 3 Satan scatter symbols anywhere on reels 1, 3 and 5 or trigger this bonus during the ‘Fun Palace’ feature. The ‘Fun Palace’ bonus symbol is not available during free spins, but scatters are, and every scatter that land on the reels will add 2 free spins.

Moving and Spreading Wilds: During free spins, there will be a wild reel that moves from left to right after every free spin. When it does this, it leaves a fiery trail on random symbol positions behind it. When a wild symbol lands into any of the positions set on fire, all positions set alight will turn into wild symbols.

In Command Re-Spin & Expanding Wilds: The ‘In Command’ feature triggers at random during the base game. All wild symbols on the reels will expand to create wild reels. If this action does not produce a win, a re-spin is awarded with the wild reels remaining in place. Re-spins will continue until this feature produces a win.

Min-max bets are 0.10-100.00 and the theoretical RTP is 94.20%. This is very low for an online slot as most slot games have an RTP of 96% , but quite a few Play’n Go slot games fall under the average. Any big wins on this slot title will come via the features and not really from natural symbol combination wins, so Annihilator is a high variance video slot.

Even if you are not a thrash metal fan the Annihilator online slot offers mouth-watering gameplay. There are 2 bonus games which include free spins with an awesome ‘moving wild reels’ and ‘spreading wilds ‘feature and a pick me bonus that could land up to 50x the spin bet plus trigger the free spins bonus where you could win 5,000x your stake! On top of this, re-spins will not stop spinning, free of charge, until you get paid. As for those that are fans of the Annihilator band and also love to play video slots, then the Annihilator slot title is a dream come true.