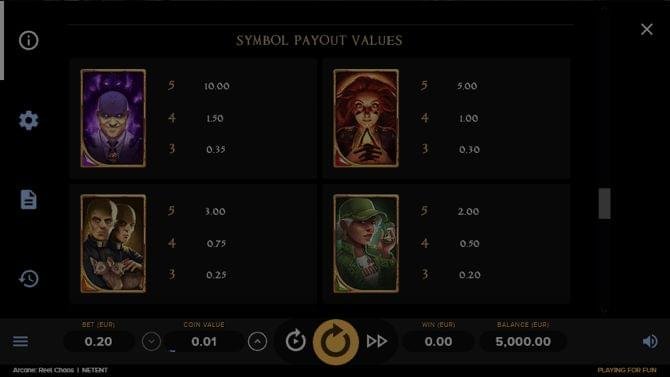 Arcane Reel Chaos is set in a dystopian world of the future, but despite what seems on the surface to be a depressing story it is a lot of fun to play. This slot game, made by Swedish producer NetEnt, has a four-stage bonus round that provides a lot of thrills to players who spin the reels on Arcane Reel Chaos.

Arcane Reel Chaos is heavily influenced by the world of the occult, with a possessed character going by the name of Deep Pockets terrorising the city where the slot game is set. As you would expect from a game set in dystopia the design of the slot is quite dark but remains clear enough so that players are able to see what is going on when they spin the reels. There are four heroes in the game - Flare, Chronos, Zero.x and Psyop - with each of them contributing to a solidly developed theme.

The dark look of the Arcane Reel Chaos slot game might not be for everyone, but it knits together nicely and matches the dystopia theme that is baked into the slot by producers NetEnt. A multiplier wheel of fire is one of the major animations that players who test out Arcane Reel Chaos will be hoping to see when they play the game. Various cards are animated on the game as well, while the sounds add to the spooky mood and feel of this futuristic-design slot game.

NetEnt slots are usually at the top of the class when it comes to gameplay but Arcane Reel Chaos seems to fall a little short in this department compared to the company's big success stories of the last few years. Arcane Reel Chaos delivers the reel chaos of its name, but despite a high level of action it is still relatively easy for players to be able to follow what is happening on the reels. The gameplay on offer on Arcane Reel Chaos is quite reminiscent of a graphic novel, both in the design of the slot and the way that the story line unfolds as players hit the spin button on the game.

All four of the heroes included in Arcane Reel Chaos - Flare, Chronos, Zero.x and Psyop - trigger their own special features and this is where the biggest wins on this NetEnt slot are likely to arrive. Although the heroes are the highest-paying symbols on this slot, Deep Pockets himself can also pop up on the reels and this is going to result in a big win for the player when it happens as well.

Gameplay on the slot is similar in a way to the Hellboy slot machine, which was released by Microgaming, but there are enough unique features in Arcane Reel Chaos to make it stand on its own two feet. The main Arcane Reel Chaos feature is triggered by the scatter symbol and there are wilds that can land on the reels to help those big wins come along as well.

Like the majority of NetEnt slots released at online casinos, Arcane Reel Chaos has a good range of bonuses to keep players happy. There are stacked wilds on the game, as well as both multipliers and multiplying re-spins.

As if all of that was not enough to tempt people to give Arcane Reel Chaos a go, the presence of overlay wilds might just tip the balance. In the free spins game, players are aiming for the heroes mentioned above to defeat Deep Pockets and save their city in the process.

The bet line multiplier increases every time this happens, so up to 4x the value of free spins wins can be awarded to players who get lucky in this part of the game.

NetEnt games do not use cash as stakes and winnings with a coins system in play instead. Before spinning the reels for the first time on Arcane Reel Chaos, players should select the Coin Value they want to play with on the game, which is between 0.01 and 10.00. As this slot automatically has a fixed number of 20 coins per spin, the min-max bets are 0.20-200.00 per spin.

It works fine but may take a little bit of getting used to for anyone who has never opened a NetEnt slot before. In terms of the variance, the game is low to medium while the return to player is pushing the 97 per cent rate, so there is pretty good value on offer to players.

The dark mood and feel of Arcane Reel Chaos will not appeal to everyone, that much is clear, but anyone with an interest in dystopia or the occult will likely find a lot to like about this slot game. The bonuses are fun to play and there is potential for good wins on the free spins feature. While NetEnt has produced better slot games in its time, Arcane Reel Chaos is certainly worth checking out.