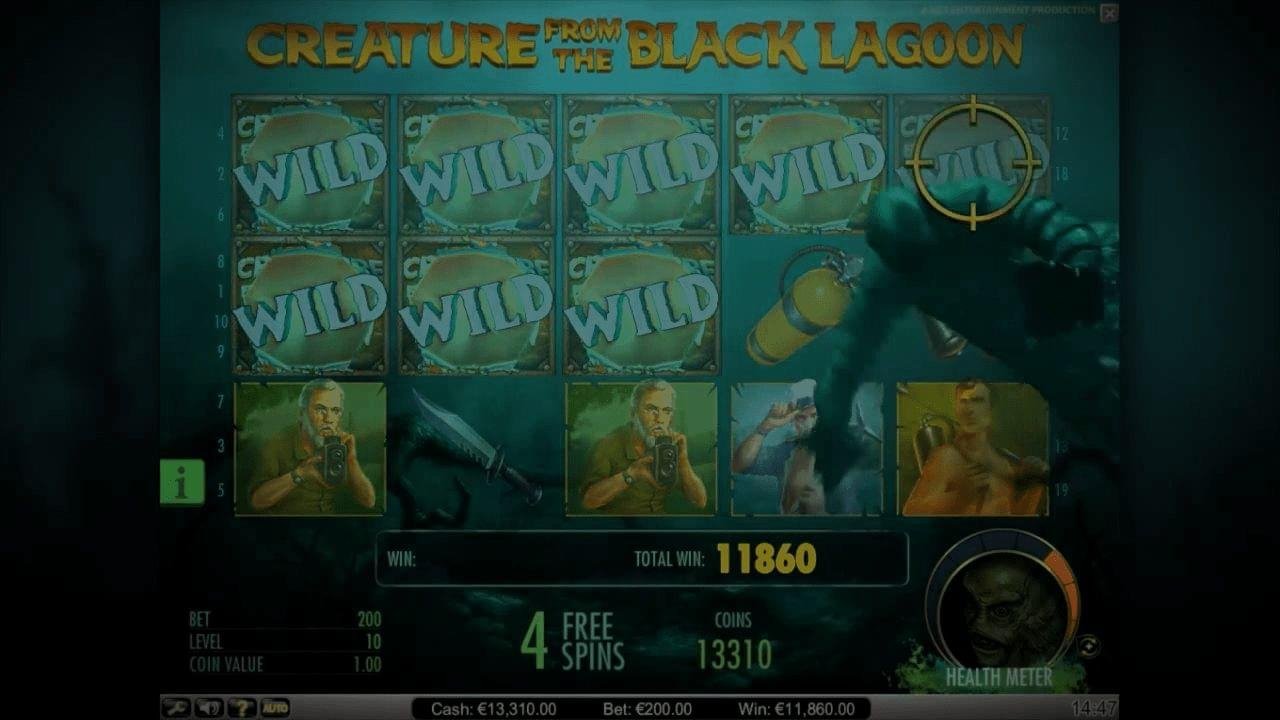 Creature from the Black Lagoon is a blast from the past for movie buffs with NetEnt and Universal teaming up to reimagine this iconic monster film into a modern day slot machine. You can expect 20 paylines, free spins, and multi-feature Wilds to all be available if you dare to spin the reels of this monster slot.

Creature of the Black Lagoon was created back in 1954 and the slot game has been heavily influenced by that hugely successful movie. The main explorer characters are all involved but it’s the half-gill, half-human monster that steals the show in the free spins feature.

You’ll watch the creature capture Kay before the feature starts and it’s then your job to save her with the help of your trusty harpoon and a bunch of free spins. Save the girl, save the day, and win a handful of cash prizes along the way.

The slot game has a traditional look and feel without the need for shiny graphics and animations. NetEnt has made a good job of staying true to the movie without letting modern technology take over. All of the graphics have been given the vintage treatment with the in-game symbols all reflecting moments from the movie as well.

It’s the soundtrack that completes the game though with a calming song that instantly feels like you’re on an adventure that’s about to get very exciting. The music picks up the pace when the winning combinations land on the reels and you get a feeling that the creature is close to making an appearance sometime soon.

Creature of the Black Lagoon is played out on a slot layout of five reels and three rows with a total of 20 fixed paylines. It’s a traditional layout and all of the gameplay buttons are easily accessible in the game bar below the reels. The symbols are all influenced by the movie with a dagger, camera, scuba tank, and binoculars making up the lower value symbols. The main characters of Lucas, Carl, David, and Kay make up the high-value symbols.

You can win up to 750x your stake when landing 5 x Kay symbols on an active payline, and there are multipliers of up to 125x to pick up in the low-value symbols. There are three Wild symbols available to help you with bigger multipliers with Sticky and Spreading capabilities, plus the free spins feature offers up to a total of 20 free spins with additional spins available as an extra bonus.

You need to spin and land the Target symbols to shoot him with your harpoon, each shot will reduce his health and reward you with extra prizes. There are four levels to his health and the lower his health gets, the bigger the multipliers become with the Spreading and Sticky Wilds coming into play.

The Sticky Wilds will stick to the reels for one respin and the Spreading Wilds will cause other symbols on adjacent reels to turn Wild as well. All of these Wilds help to boost the number of winning paylines and you’ll soon notice the extra prizes starting to rack up when the free spins and Wild symbols combine.

The minimum bet per spin is $/€0.20 and the game offers up to a maximum of $/€100 per spin. The game’s RTP is set to 96.5% and has been classed a medium variance slot. You should find some success when landing winning paylines but don’t expect the prizes to be huge, even in the free spins feature we found the prize amounts to be on the smaller side.

Creature of the Black Lagoon has that vintage vibe and it works perfectly with the iconic movie theme. NetEnt has done a great job in recreating this into the slots format. The extra detail and story line in the free spins feature makes for entertaining gameplay, plus the medium variance should create interest from the lower stakes players with the likelihood of frequent small wins.