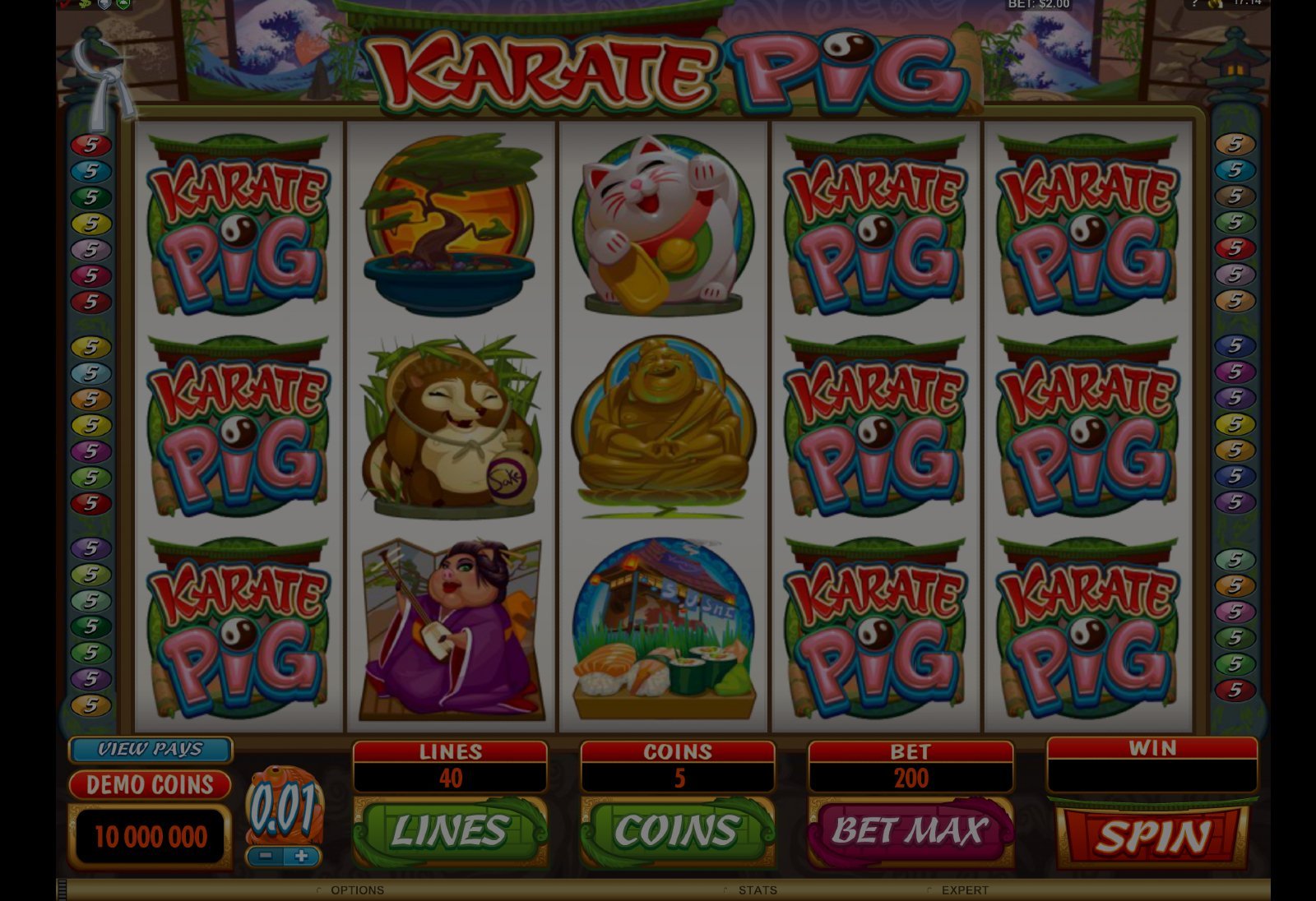 Karate Pig is another entertaining slot from the dependable Microgaming team of developers that will no doubt have you chopping and kicking your way to some good payouts. The main bonus feature will be the ultimate aim here as there are some impressive rewards – especially if you can unlock it a total of seven times to get to Black Belt.

The name of this video slot pretty much sums up the theme that you will be able to enjoy. You follow Karate Pig, a pig that is training himself in one of the most well known martial arts. He is aiming to reach the grade of ‘black belt master’ while you will be hoping to cash in on his success along the way.

The Karate Pig video slot is getting on in age now having been first released in 2012 but it still has a quality of graphics that allows it to compete with more modern slots. Each of the symbols on the reels has its own animations while the bonus rounds will also impress players with the animations involved.

There is a typically oriental soundtrack that plays out in the background while the soundbites during the bonus games are interesting, to say the least.

The idea is to land symbol combinations starting from the 1st reel that then progress on each subsequent reel to the right. Almost all symbols require the player to land at least three symbols in a combination apart for the wild symbol which requires just two.

The Karate Pig logo is the wild symbol and this can appear stacked on the reels to add even more potential for multiple wins. It will be able to substitute for all symbols except the two different scatter symbols. That wild symbol also pays out the single biggest coin reward in the game if landed 5 times on an active pay line.

Among the other symbols on this video slot is a number of theme-related characters and items and the rewards for landing them in symbol combinations can be found in the paytable. That paytable will also contain the rules for the game and provide you with information on the two bonus features that can be found on the Karate Pig video slot.

Karate Bonus: This is the main bonus feature on the Karate Pig video slot and once triggered, players will be able to choose one of two bonus games. After completing either bonus game, the Karate Pig will move up another colour karate belt. The ultimate aim is to unlock this Karate Bonus seven times so that the Karate Pig can eventually become a black belt.

Of the two bonus rounds that players can choose, they are as follows:

Final Showdown: Once the Karate Pig has managed to collect each of the seven belts, he will be tasked with entering a final showdown against another blackbelt. There are three rounds in total for this fight and players must decide which punch combinations to use. There are payouts after each round and should Karate Pig win, there is an additional bonus payout to look forward to.

Free Spins: 15 free spins can also be triggered on the Karate Pig video slot. This happens once the player lands the ‘Gold Coin’ scatter symbol on both the 1st and 5th reels. During this round, all payouts are doubled whilst there is also the possibility to retrigger the free spins round.

Players can wager for as little as 0.01 per spin or a maximum of 20.00 per spin. The ‘lines’ controls determine how many pay lines a player wishes to wager on while players can also alter the number of coins between 1 and 5 to place on each line and the value of each coin between 0.01 and 0.10. For this, you will get a slot containing a high RTP of 96.52% and medium variance.

The Karate Pig is plenty of fun and is not bad to look at either. While you will spend a lot of time pulling in smaller rewards from the reels, this is one of those slots that encourages you to play the long game in the hope of progressing through the simple storyline and the impressive payouts that the bonus feature provides.