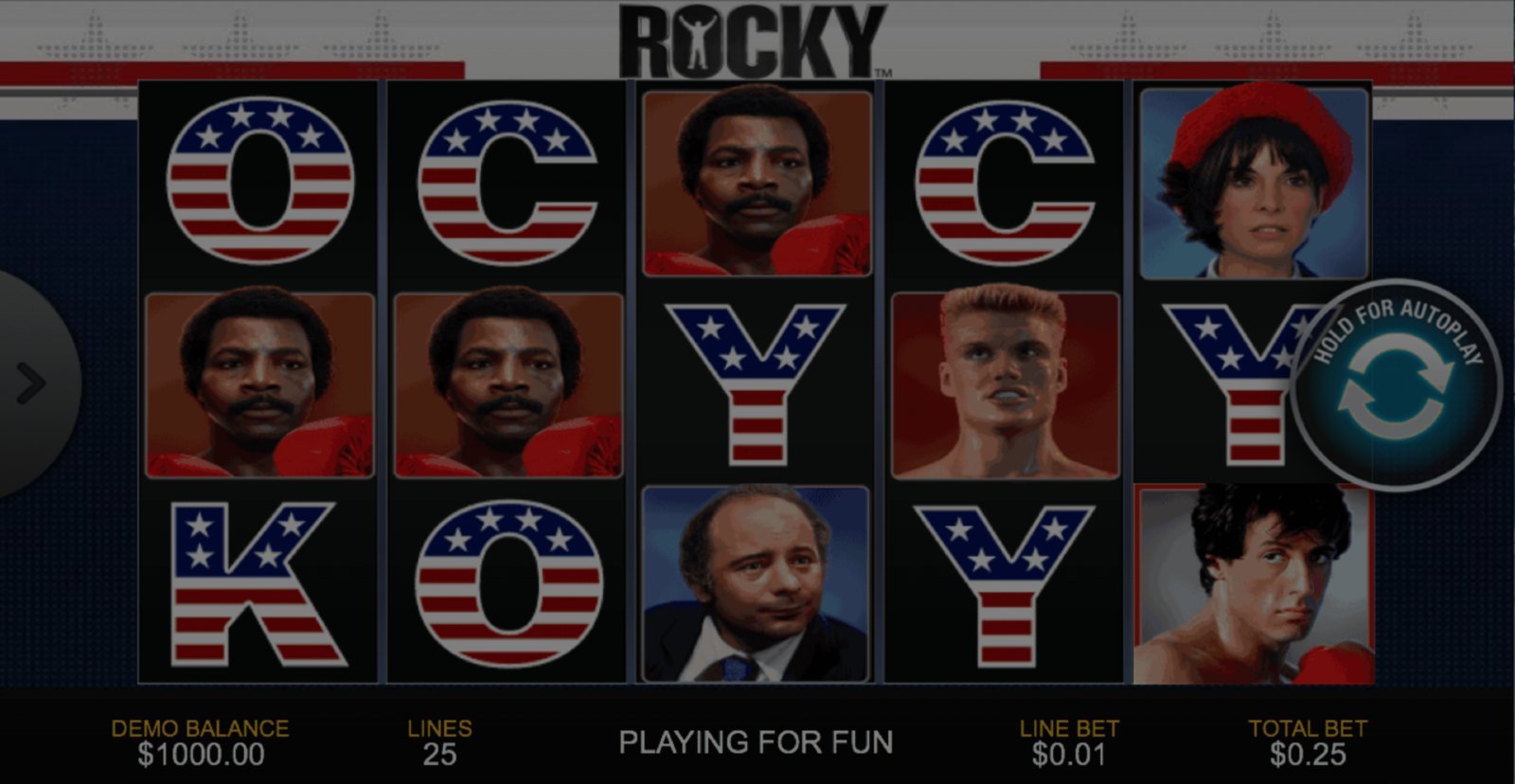 Rocky is the undisputed champion of fighting themed movies and now he’s fought his way into the slots world as well. The Rocky slot game comes with three distinct bonus features, symbols inspired by the movie, and in-game footage cut straight from the movie. If you love the Italian Stallion then you’re going to love this game.

It’s all about the knockout with Rocky. Spin the reels to land various symbols designed with Rocky’s rivals and girlfriend. Apart from the Scatter symbols providing free spins and the Wild symbol boosting wins with up to 10,000x multipliers, the main bonus round is linked to the boxing glove icons.

The Knockout Bonus round takes you to a separate game screen where you choose an opponent and watch clips of their fight against the Italian Stallion. Each knockdown will reward you with bigger multipliers as you take down a walk down memory lane and relive those famous boxing scenes again.

The graphics and overall look of the slot is not what you would call modern but it fits in with the overall theme nonetheless. Most of the symbols are designed with stills from the movie so there is not so much use for specially designed graphics anyway.

You’ll find more movie clips than animations in the Rocky slot game, but we’re sure that players would prefer to relive the movie than watch cartoon versions of it. The soundtrack throughout the game is basic but comes straight out of the 70s and 80s Rocky era, and again, it does work in the game’s favour to reflect that vintage feel of the Rocky phenomena.

Rocky is played out on the typical slot layout of five reels and three rows with a total of 25 paylines. The set of symbols take you straight back to the movie with all of Rocky’s rivals making an appearance, Apollo Creed, Clubber Lang, and Ivan Drago, as well as Adrian and Paulie. Creed provides the top paying prize out of the standard in-game symbols with a multiplier worth up to 1,000x your line bet with five in a payline.

The Rocky logo Scatter symbol and Wild character symbol both play a big part in the game with extra payout potential and free games rewarded when you land them on the reels. In addition to these, the game also offers two extra side games called the Knockout Bonus and the Rocky Feature. We’ll explain these in the next section but it’s worth pointing out the impressive way that this game provides players with multiple ways to win, the many different bonus symbols in play makes the Rocky slot game an entertaining experience with wins always around the corner.

The Knockout Bonus is the game’s most exciting feature and is activated when you land the boxing glove symbols on the first and last reels. You’ll then be asked to choose an opponent to fight and taken to the knockout game screen. Here you’ll watch footage from the movie and each round that Rocky wins will reward you with a cash prize.

The Rocky Feature is a simple yet lucrative bonus round in which you only need to spell out the name ROCKY on the reels with the letter symbols. In doing so, you’ll be rewarded with a cash prize worth 5x your total bet.

The free games feature is activated when you spin and land at least three of the Scatter logos. You can claim 15, 20, or 25 spins depending on how many Scatters you land and the additional 2x multiplier is a useful way to bump up your prizes as well. Lastly, the Wild symbol holds the key to a prize worth up to 10,000x your line bet if you land up to five Wilds in an active payline.

The minimum bet per spin is €0.25 and this increases up to €125 per spin. The RTP of the slot game is set to 97.01% with a low to medium variance. Lower budget players should find the Rocky slot enjoyable with plenty of quick and small prizes available to win.

The Rocky brand is known all over the world and so the game will find lots of popularity amongst the online gaming community. It might not look like the typical shiny modern slot game that Playtech is renowned for, but the familiar characters and multiple features makes for great entertainment. The fight scenes cut straight from the movie is a great addition and leads us to think that this Rocky slot game from Playtech is a clear knockout