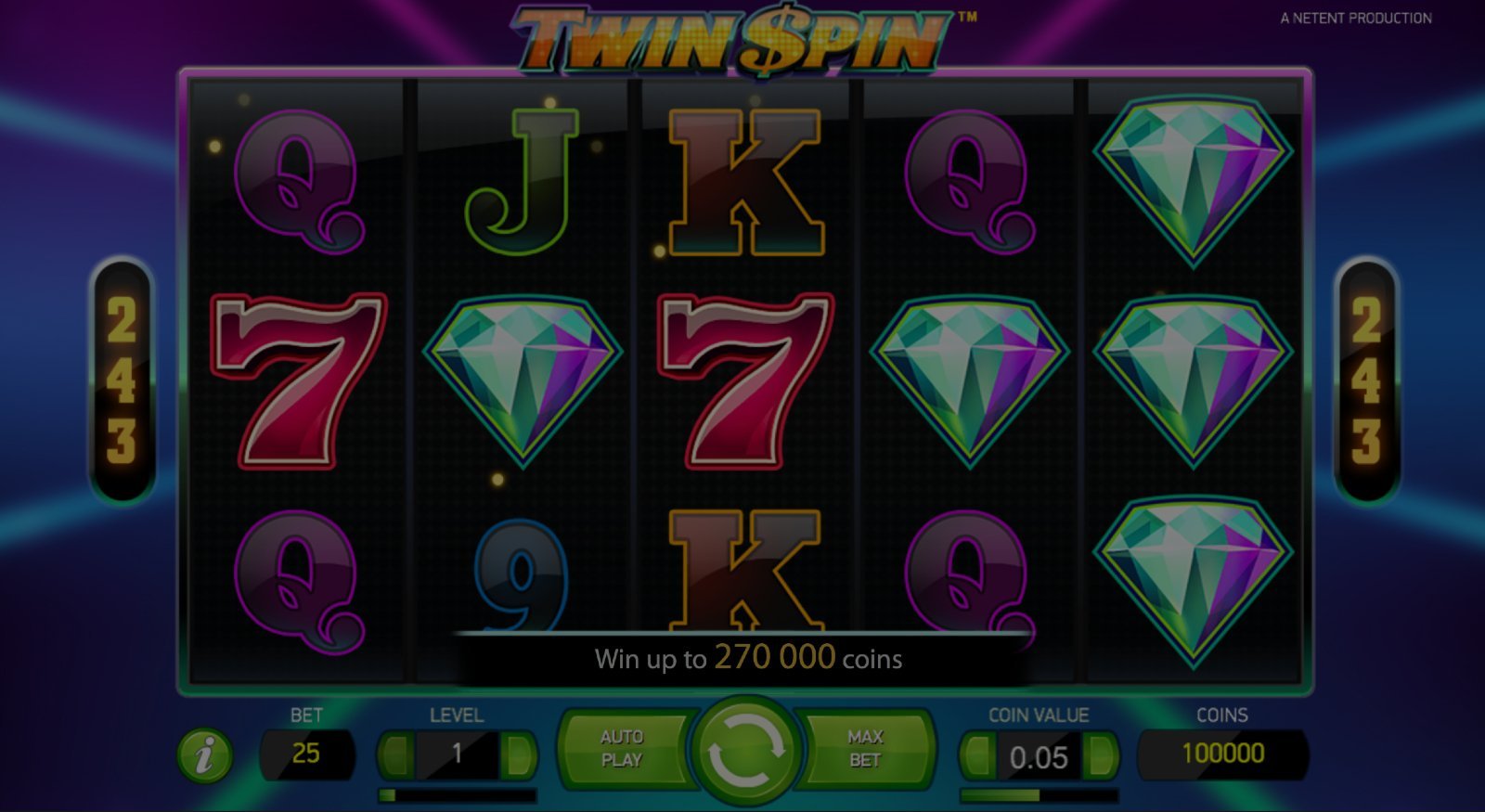 A flashback to the early days of slots when everything was fruits, bars, and 777s. The Twin Spin slot from NetEnt is nothing special in terms of looks and gameplay, but sometimes players just want to get back to basics and live out those memories of old. Twin Spin offers just that, with one or two extra features to keep things interesting.

It’s old-school slots at its very finest with a splash of modern gaming thrown in to spice up the old layout and symbols. Slots nowadays are full of fancy animation scenes and interactive symbols, sometimes some of us just want to strip it all back and spin those fruities of old.

If you’re the type of player that is looking for that simple slots game then you can’t go far wrong with Twin Spin. The symbols and layout are both familiar and the extra features help to give you the chance to still win big with enhanced multipliers and 243 ways to win.

Due to the nature of the game and the theme, there is nothing that really stands out as you spin the reels. However, the graphics are sharp and although the theme is dated, the appearance does come across as fresh which is one positive to take from the design. The dark blue background and the disco lights shining up and past the reels is as basic as it comes, but remember, that’s the whole point of Twin Spin.

The soundtrack is straight from the 1980s and has a constant electronic music groove that repeats in the background. There is a volume button for those who would rather not enjoy this old-school soundtrack though!

Played out on five reels and three rows, Twin Spin is your classic slot layout with the added spice of 243 ways to win. The main feature within the game is linked to the game title where two reels will link up with the same symbols, this can also expand out across all five reels for the top prize of 1,080x your total stake.

Everyone will recognise the classic symbols with the playing card values of 9, 10, Jack, Queen, King, and Ace, as well as the Bars, Lucky 7s, Bells, Cherries, and a Diamond. Twin Spin also carries a Wild symbol that substitutes for all symbols. The 243 ways to win is designed to allow three-reel winning combinations starting from the furthest left reel, this helps to lessen the blow that there are no free spins or scatters within the game.

The one and only feature in the game is based on the Twin Reel feature and it’s here where all your big payouts will come from. The feature is set into motion when matching symbols are linked up across two reels, this is signified by red lighting behind the reels when they first start spinning. The exciting part of the feature is that these linked reels can expand out across three, four, or all five of the reels. Complete synchronisation across the board gives you the chance to win some impressive prizes. As we mentioned previously, there are no free spins or scatter symbols to be seen. The game is based around the Twin Reel feature explained above but if you do get lucky, the payouts can be worthwhile.

Twin Spin allows bets from as little as €0.25 up to a total of €125. The RTP is set to 96.60% and has been classed as a medium to high variance. The chances of winning something big on this game are few and far between and the small wins might seem scarce, however, if you do manage to trigger the Twin Reel feature then some big payouts are certainly possible with a maximum win of up to 1,080x your stake up for grabs.

Twin Spin has definitely been released for those traditional slot gamers out there who appreciate simplicity. The old one-armed bandit style is very much the theme of the game here so if you’re someone who enjoys the animation and storylines of modern slots, then you’re going to get bored fairly quickly here. The gameplay is simple, the features are scarce, and you’ll need to be patient to reap the rewards. All in all, there isn’t a lot to talk about when it comes to Twin Spin, but we still think there is something there for the traditionalists to enjoy!