Age of the Gods Slot Machine 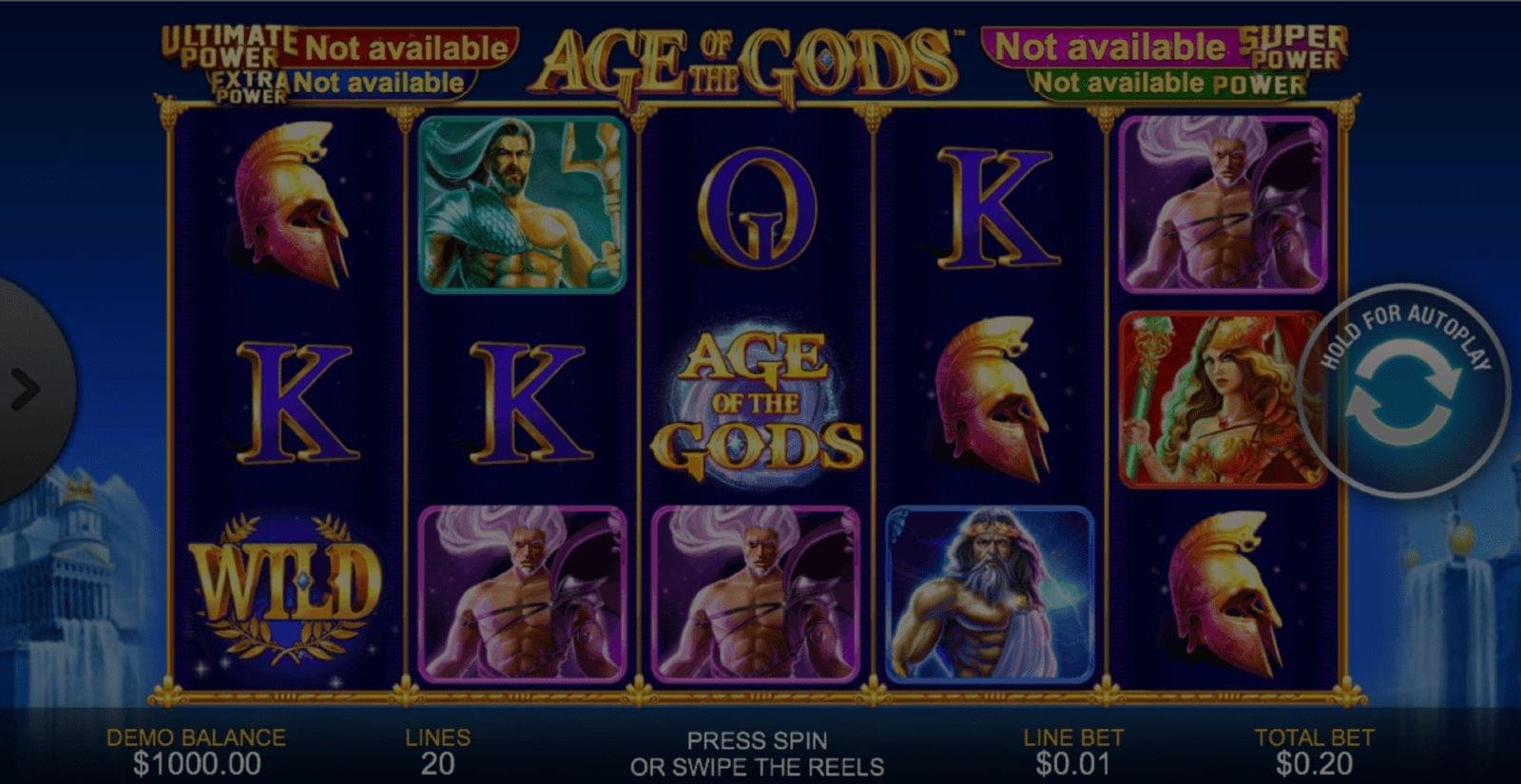 The flagship game of Playtech’s Age of the Gods series does not disappoint. The ancient Greek mythological theme works perfectly alongside the multiple bonus features and jackpots, with the game being played out in front of the famous home of the gods...Mount Olympus.

The heavenly powers held by the Greek gods underline the theme of the slot and each one of the famous gods and goddesses can be found within the gold-gilded reels. The likes of Hercules, Hades, and Zeus all make their presence shown throughout and it’s up to you to land the Age of the Gods logo symbols to enter the bonus round and reap the rewards.

Athena, Poseidon, Hercules, and Zeus all have their own bonus features and these offer various free spins and multipliers. Be careful to stay clear of the guardian of the underworld, the mighty Hades, as finding him god amongst the reels will put an end to all of your bonus fun.

Each of the Greek god symbols has been designed with an ethereal effect that plays into the theme really well, plus the gold and blue reels help to give the game its majestic charm worthy of the mighty gods. The sounds are somewhat of a letdown and we can only hear the basic beeps and rings of your standard slot, it could have been so much more with such an inspiring theme.

Animations are few and far between in the base game, but once you open up the bonus features then it all starts to come alive. Expect to see stacked animated Wilds of the gods and additional bonus screens where you flip coins to win one of four progressive jackpots.

Age of the Gods is played on a 5x3 grid with 20 paylines in total to land your winning combinations. The low-value symbols consist of the Ace, King, Queen playing card values and the high-value symbols take the form of an ancient Greek helmet, Hercules, Aphrodite, Poseidon, Athena, Hades, and Zeus.

The Wild Wreath symbol gives players up to a 10,000x multiplier and three or more of the Scatter Age of the Gods logo symbols take you to the bonus feature. The bonus rounds all offer the potential to win big and the four progressive jackpots connected to the Age of the Gods series can be won at random.

To trigger the bonus feature in Age of the Gods, you’ll need to spin at least three of the Scatter symbols which will open up a new screen full of gold coins. Flip these coins until you match three of the same god to open up their very own bonus round with unique multipliers and free spins, be careful though, flip over the image of Hades and your bonus round is all over. All of the bonus rounds start with nine free spins but the winning potential is huge with up to 7,000x your stake available in the Poseidon feature.

The Pantheon of Power on Reels feature is a nice extra that offers big wins outside of the bonus round. All you need to do is land all five of the gods consecutively across the five reels, in any order, to win 200x your line bet. Additionally, the Age of the Gods progressive jackpots are all won at random and if you get lucky enough to trigger the special jackpot feature, you’ll need to match three coin symbols to win the corresponding jackpot.

Age of the Gods gives players the choice to play from as little as $/€/£ 0.20 up to $/€/£ 500 per spin. The RTP of this slot is set to 95.02% and has been classed as a medium variance slot. Players are likely to get a nice mix of small and medium-sized wins from the game with the God-inspired bonus rounds coming along often enough to give you the chance to boost your bankroll and win big.

The flagship game for the Age of the Gods series had a lot to live up to when it was first released, and thankfully for Playtech, it made the right kind of impact amongst their online fans. The medium variance suits all types of players and the feature-rich gameplay is a huge bonus for players who like variety. It’s a magnificent slot from Playtech and so it really is a case of finding out if the gods are with you when you next spin the golden reels of Age of the Gods.