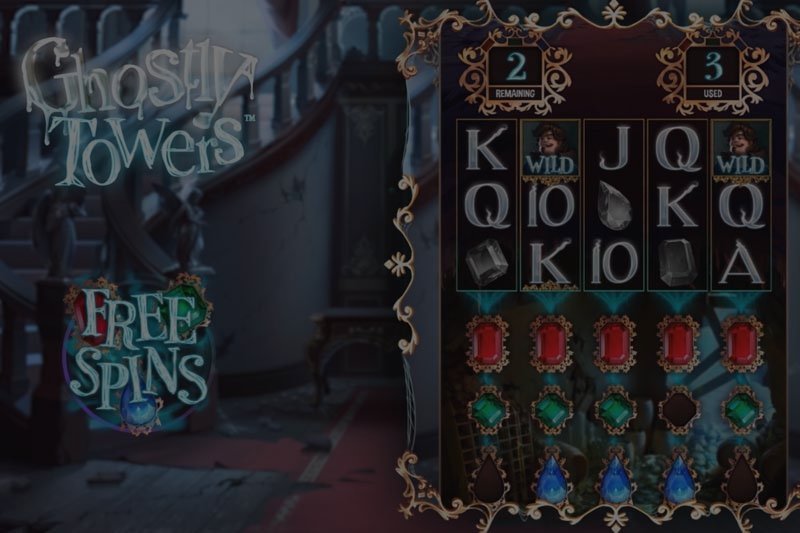 Ghostly Towers presents a spooky slot game with a French ghost as your host. There are tons of awesome animations, free spins, and modifiers that give you up to 15 wilds, turn losing spins into wins and randomly apply x20 multipliers. Plus, you can gamble your winnings at any time!

Visit the haunted house of Ghostly Towers where you will get acquainted with an eccentric French ghost named Pierre who will frighten the reels into paying out spooky bonus wins using one of his many game modifiers!

If you are looking for pristine graphics and tons of perfectly executed animations, Ghostly Towers certainly fits the bill. In fact, Novomatic (Green Tube) may have created their best online slot so far.

Regular reel spins don’t create that many animations but when you begin to trigger features and game mods, awesome displays of state-of-the-art animations come to life. Ghosts begin to float on the reels, swords swipe at symbols, and gold coins fly up into the air. To match the game’s excellent design and digital movement there is a ghostly theme tune and a wide variety of sound effects creating a truly spooky but exciting atmosphere!

To line up the highest combination win, you will need to land Pierre the French ghost 5 times on a pay line. Pierre the ghost is also a wildcard symbol. He will substitute/replace regular symbols to help you connect more combination wins.

Regular symbols are the glowing moon symbol, which is the next highest paying symbol combination after the wild symbol. Then there are the A, K symbols that both pay the same amount, and lastly, the Q, J, and 10 symbols that also award the same payout amounts. There is also a free spin scatter symbol which cannot be substituted by the wild.

The only other symbols you will see on the Ghostly Towers slot game are gems that only appear during the free spins game to trigger game mods. However, during the base game, these mods trigger randomly without the need for a symbol.

Wickedly Weird Wilds: Pierre appears on the reels at any time as a red ghost. He will magically trigger a mod that spreads up to 15 wild symbols on the reels potentially giving you 20 pay lines full of wilds.

Spooky Symbol Slither: This mod involves a blue ghost version of Pierre who will swipe symbols off the reels using his sword. He then replaces with new ones that guarantee a combination win.

Mental Multiplier Mania: When this mod kicks into action, a green version of Pierre will launch a x20 multiplier which is applied to the total accumulated win from the reel spin.

Free Spins: You are awarded 5 free spins when the scatter symbol lands 3, 4, or 5 times which will, in turn, send 6, 8, or 10 random gems respectfully into 3 rows of 5 situated below the reels. Each row represents the green, red, and blue ghost mods mentioned above. Collect 5 gems of the same colour to trigger any of the above 3 mods. When this happens, the number of free spins remaining will freeze. Next, the reels will spin, and the gems will count down with the mod applied to every spin.

Gamble Feature: After every win, you can choose to gamble. You can double your money by correctly guessing whether the next card will be red or black.

Min-max bets are 0.20-100.00 per spin. As for the RTP, this is 95.15% which is quite low compared to slots from other developers. That said, the gameplay more than makes up for this thanks to the free spins, Wickedly Weird Wilds, Spooky Symbol Slither, and Mental Multiplier Mania mods. Bearing all this in mind, you will be in the money reasonably often, plus wins rarely payout in small amounts. As a result, the Ghostly Towers video slot is rated as a medium variance game.

The only let down is the fact that the RTP is not higher. Aside from this small detail, the Ghostly Towers slot game has got everything else right. Pierre the ghost springs up awarding extra wilds, multipliers, and win spins making sure players are continuously engaged. Adding to this, the inventive free spins game adds to the entertainment. The idea of collecting gems and adding features to the reels with extra spins on top of the existing free spins makes this bonus well worth waiting for. When weighing up all these features and the gameplay, it is safe to say that Novomatic’s Ghostly Towers is going to be a popular slot title for years to come.