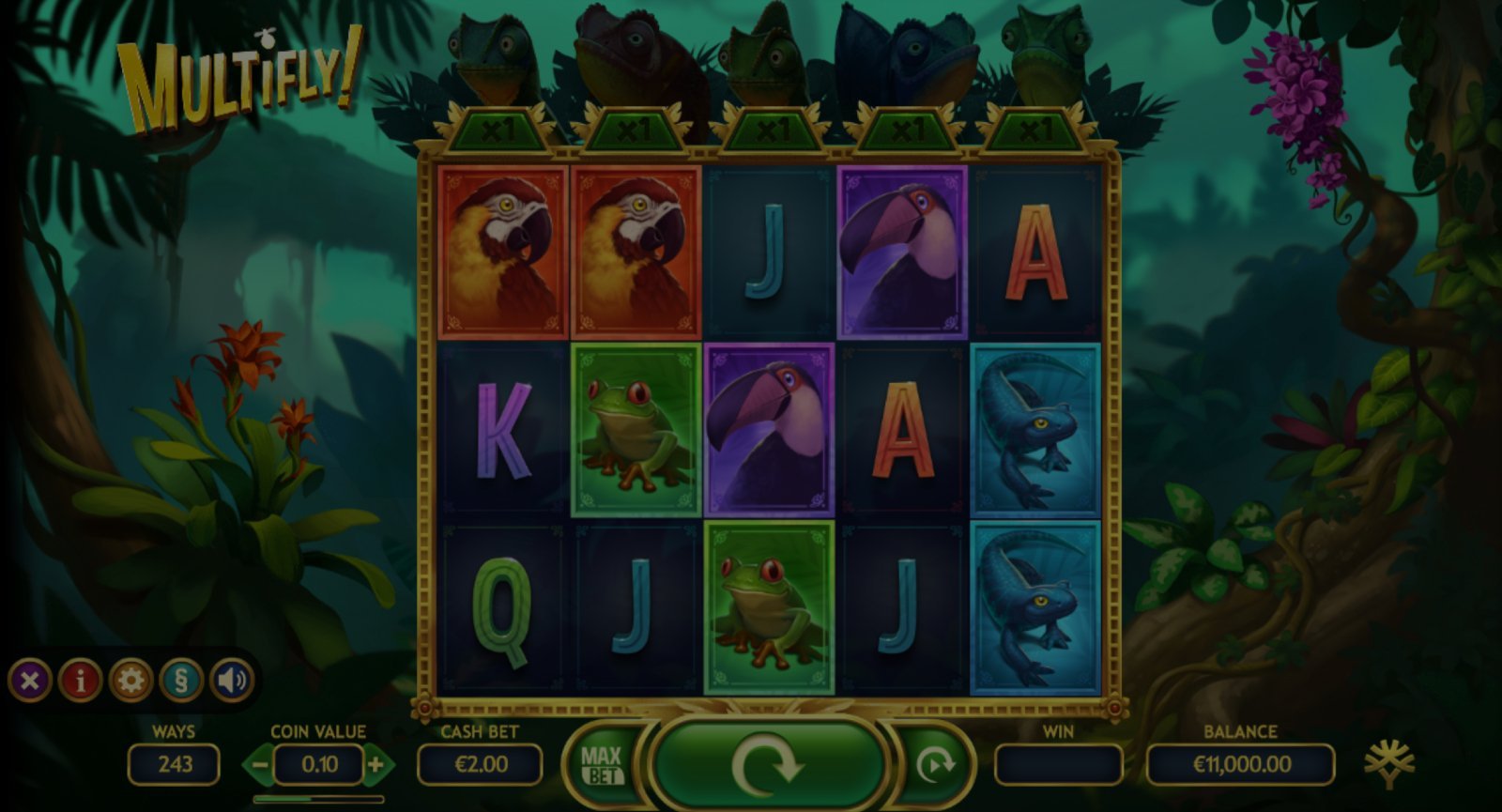 Multifly is a 243-ways-to-win animated slot with free spins, multipliers, drop-down wins, and wildcards. Collect multipliers to increase your wins and watch the hungry chameleons feed off your success and help you to create bigger wins on this fully animated 3D slot game from Yggdrasil.

Set in a murky tropic jungle a group of chameleons and birds share a swampy habitat where golden flies are never safe from the hungry mouths of the every lurking lizard species who sit just above the reels. Every time a golden fly risks a journey onto the reels, it spells death as the chameleons feast upon the flies’ bad decision making while you reap the rewards of resulting multipliers.

Yggdrasil has made yet another brilliantly animated 3D slot game. The Multifly slot game begins with an upbeat drumbeat opening up into colourful reels set inside a dense jungle. In the backdrop, the leaves slowly sway in a gentle breeze while on the reels a group of 3D symbols that are made up of tropical birds and insects that stare back at you.

As you spin the reels and create combination wins chameleons appear from behind the top of the reels. They sit very still until suddenly their long tounges roll out and snatch flies out of thin air in an animated feature that rewards multipliers.

Every one of these regular symbols can be substituted by a wild symbol which is also the key to increasing the multiplier counters set above each reel. The only other symbol we have not yet mentioned is the scatter which unlocks the game’s free spins bonus round.

To view the payout values for each combination open the ‘ ’ button to activate the menu. The red ‘i’ button will open the paytable. Each of the win amounts you see here are multipliers of the ‘coin value’ and not the total spin bet. If you change the ‘coin value’, then the win values in the paytable will also change dynamically.

Other menu options include the settings button which is a cog. Here you can turn ambience sound and sound effects on/off, display betting values as coins, set the spin speed from turtle to hare using a sliding bar and set up auto spins.

Dropdown Features: Each time a symbol combination is formed the winning symbols will be taken off the reels and an extra wild is added. New symbols will fill the other spaces.

Reel Multipliers: Each time the wild symbol hits a reel, the multiplier at the top of that reel will increase. The multiplier will then be applied to any combination wins that has at least 1 symbol in its combination on that reel.

Mental Multiplier Mania: When this mod kicks into action, a green version of Pierre will launch a x20 multiplier which is applied to the total accumulated win from the reel spin.

Free Spins: You will need to land 3 of the gecko scatter symbols to trigger the free spins game. All multipliers from the base game will carry over.

Setting your bets is achieved via the ‘coin value’ area. You can set your coins to be worth between 0.005 and 3.75. Every spin will use a fixed 20 coins which is multiplied by the ‘coin value’ to determine your spin bet. At 0.005 per coin, the minimum spin bet is 0.10 per spin, while at 3.75 per coin the maximum bet is 75.00 per spin. You can use the ‘Max Bet’ button to automatically set the maximum spin bet.

Yggdrasil has rated this slot as 95 volatility so this is a high variance slot game. The Multifly slot game’s RTP is 96.3% which is very good for an online slot.

The Multifly video slot brings a brand new theme to the scene and mixes new and existing features into its gameplay. The dropdown feature helps to accumulate multiple wins from a single spin and adding to this your chances of landing a big win are considerably increased by the wild multiplier which appears after every win and tends increase the multiplier counts above the reels. Add free spins that carry over base game multipliers on top of this, and you have a slot that gives you the chance to cash in some big wins!