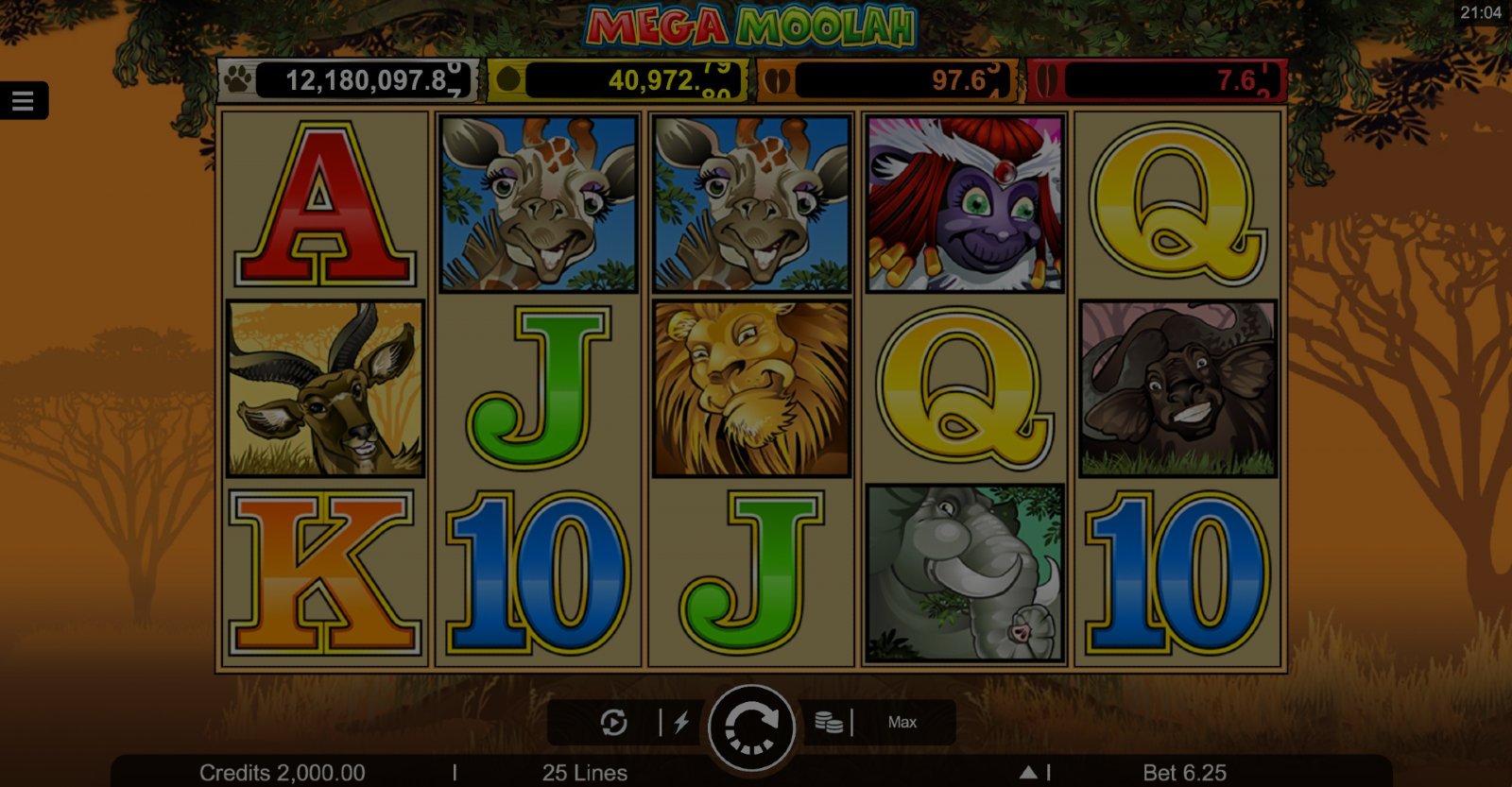 Mega Moolah is an African safari-themed slot with a simple layout and pretty basic graphics. Having been created back in 2006, it is considered one of the original slot games, but it is still one of the most played, partly due to occasionally paying out huge amounts.

The theme of Mega Moolah is animals and you’ll find several as you play. Giraffes, zebras, kudus and of course, the lion. There’s something a bit reminiscent of a crude version of The Lion King here and true to its name, the lion is the symbol that allows you to access rewards. More on that later.

While the game is fairly simple in terms of animation, there are repetitive, identifiable movements that the animals make when they come up on your spin. They have facial expressions and wiggles, and the music is appropriately safari-esque, if such a thing exists.

Generally speaking, the graphics are pretty basic, but this is to be expected, given the age and durability of the game.

Mega Moolah has 5 reels and 25 paylines, as well as a jackpot game played with a spinning wheel that resembles the old Wheel of Fortune game. Gameplay is really quick; select your bet then spin and, hopefully, win. Aside from the typical 10, J, K, Q and A symbols, the higher value symbols are all animals.

There is also a separate jackpot screen with a spinning wheel. The jackpot game triggers automatically, and Microgaming explain that the random algorithm is designed to spread opportunities to win out across all its players. With this progressive jackpot, the more you wager, the more likely you are to access the highest-level jackpot game – mini, minor, major or mega. Spin the wheel and cross your fingers.

There are several bonuses to look out for with Mega Moolah. Being the wildest animal, it is of course the lion that is the wild symbol. It has the ability to replace all other symbols except scatter and create extra win-lines as well as doubling your pay-out if your winning pay-line includes a lion symbol.

The monkey symbol is the scatter and if you want to access 15 free spins, you’re looking to get 3 monkeys. Even better news is the wild lion symbol now triples your winnings while you’re playing with free spins. If you get another 3 monkey symbols during your free spins, you can be awarded extra free spins, up to a maximum of 30.

When you access the bonus game, you get the chance to win one of the four progressive jackpots. The more you stake, the higher the level of jackpot you can win. The four levels are mini, minor, major and mega (in order of jackpot size). For the mini jackpot, a typical payout is under £100, while minor pays out around ten times as much. The major jackpot again typically multiplies the winning possibilities from the minor jackpot by ten, but the mega jackpot is what has made Mega Moolah so famous over the years. It starts at £1 million, but as recently as 2018, one user one 18 million Euros.

Perhaps unsurprisingly, given the size of jackpot that can be won, the RTP of Mega Moolah is quite low, at 88.12%.

Mega Moolah is actually a low variance slot, as the main game pays out quite regularly. However, unlike a lot of other low variance slots, there is the chance to access that headline-drawing massive jackpot.

Mega Moolah is very simple to play, and its basic main game and low variance mean that it’s popular among beginners and casual players. The gameplay, graphics and sounds are all very simple but don’t look offputtingly outdated alongside other slots. The monkeys add a bit of fun and adrenaline to the game, as does the random jackpot wheel. This is of course due to the possibility that you become one of the several millionaires that have benefited from Mega Moolah’s mega jackpot over the years.

It is this dream of winning big that keeps players coming back despite the low RTP.