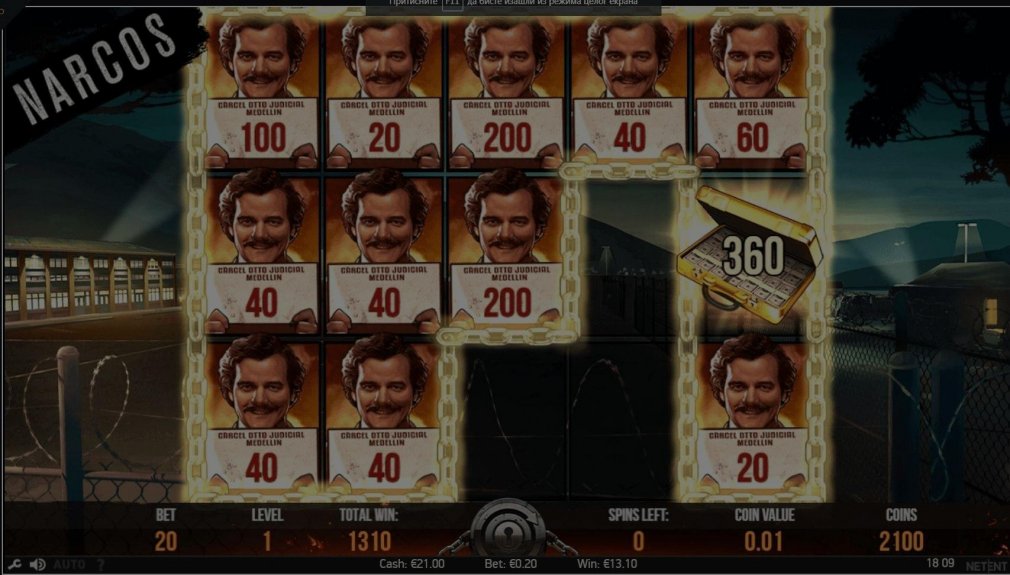 Narcos online slot title takes the Netflix series based on Pablo Escobar and rolls it into 5 reels with 243-ways-to-win. The gameplay is packed features such as walking wilds, a Drive-by-Feature, Locked-Up-Symbols with multipliers and symbols upgrades as well as a high-paying free spins bonus.

The Narcos slot title was created off the back of one Netflix’s most successful series that tells the story of the ruthless drug lord Pablo Emilio Escobar Gaviria. The scene is set in Medellin, Colombia in the 1980s and 1990s with Escobar on the run from US Narco agents Javier Pena and Steve Murphy.

Narcos presents players with 3D reels set in the streets of Columbia with 3D symbols of Pablo Escobar, narco planes, cash, weapons, and DEA agents altogether bringing the Netflix series to players’ mobile and desktop devices as a video slot game. One stand-out feature is the spin button which is a 6 barrel gun that rotates as the reels spin. You can also hear planes flying past in the background, gunshots and plenty of explosions when features are triggered. Plus, you have to love the Columbian style theme tune which was used in the Narcos series itself.

Narcos has 5 reels in a 5x3 grid, uses 243-ways-to-win to line up combinations, and is arguably one of NetEnts best-designed slot games as well as most exciting. There is plenty of explosive action that begins with the regular symbol combinations. These are split into high, medium, and low payouts. There is also a ‘Department of Justice’ DEA Special Agent wild symbol which is the slot’s wild card symbol.

Javier Pena, Steve Murphy, and the wild symbol combinations are the highest paying. Land 5, 4, or 3  across the reels, for 300, 80, or 20 coin payouts respectively. To see the payout value of the medium and low paying symbols, click ‘i’ to open the paytable on which every win shown is depicted in coins (not cash) and will be multiplied by the ‘Level’ bet. Therefore, 5 Javier Pena symbols paying 300 coins will be multiplied by 5 paying 1,500 coins.

Every time you increase the ‘Level’ bet before you spin the reels, 20 coins will be placed on the total spin. You can see the total number of coins under the area labeled as ‘Bet’, and each coin’s cash value is determined by the value you set using the ‘Coin Value’ box. The cash figures are shown below the reels.

To configure quick spins or spacebar to spin, use the spanner icon, and to control the slot’s volume, there is a sound button. Spinning the reels is achieved using the 6-barrel revolver or you can use ‘Max Bet’ to spin at ‘Level 10’ with 200 coins per spin. If you prefer the reels to spin on auto, use ‘Auto Play’.

The Walking Wild: When a wild completes a win, it will stick on the reels and move to the left after each spin until it finally reaches reel 1 and disappears.

Drive-by-Feature: This feature randomly turns high paying symbols into wild symbols and often creates a win as well as activates the walking wild feature at the same time.

Locked Up Feature: This symbol is Pablo Escobar holding the ‘catch me’ sign. If 3 of these symbols hit the same row, they will automatically move together and a multiplier of your ‘total spin bet’ will be awarded. This could be anything between 1x to 10x the bet. This feature can also include ‘Golden Locked Up Symbols’ with more multipliers, upgraded symbols, and additional values added to the value of the locked-up feature win.

Free Spins: The free spins car symbol is on reels 1, 3, and 5. Land them all at the same time and the Narcos slot will award 10 free spins. On every spin, one of the high-value symbols could randomly turn into a wild symbol. The walking wild feature is also active, and if there are any remaining on the reels, then free spins will continue until the last walking wild has left the reels.

It is hard to imagine that there is a slot player out there that would not like the Narcos video slot game. Its theme is one that intrigues most of the world, largely because Escobar is a cult figure in the history of the US’s war on drug, and the fact that is based on the Netflix Narcos series with the main characters all included as symbols on the reels.