Quest to the West Slot Machine 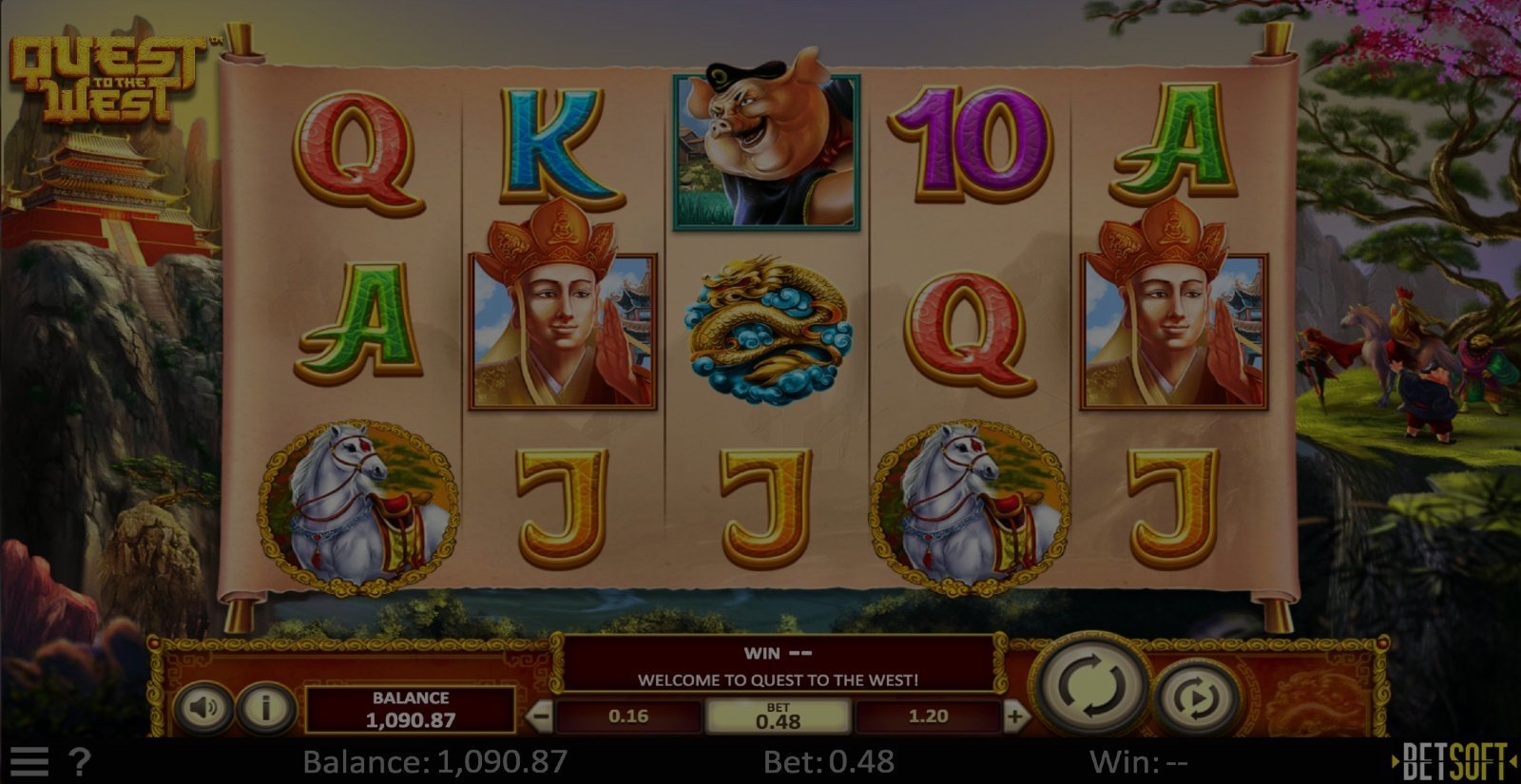 Quest to The West is an exciting slot game that gives you access to the divine Monkey King’s rainforest. You will need him to land on the reels regularly to link up combination wins and to unlock re-spins that could lead you to a potential fixed jackpot payout worth 1,000x your spin bet.

Monkey King and adventure are the main theme of the Quest to The West online slot game where you will embark on an epic journey into a strange world filled with odd characters.

Expect fast spinning reels and state-of-the-art 3D design as you spin the reels on this oddly themed slot game. There is an animated background that shows a waterfall and the Monkey King’s gold temple high up on a hill surrounded by a luscious rainforest. On the reels, there are some basic mini animations, which is quite unusual for Betsoft as usually, this developer packs out its slots with moving parts. As for the slot’s soundtrack, this is a slow Chinese theme song.

You will be playing on 5x3 reels with 25 fixed pay lines. Game options available to get you started are made of auto spins, manual spins, betting controls, sound controls, and turbo play. Check the menu by pressing the ‘i’ button for most of these options as well as for the slot’s paytable and rules.

You will have 11 symbols to line up into combinations of 5, 4, or 3. These are symbols of characters from the Monkey King kingdom. The highest paying symbol is the golden-haired man who will pay out 37.5x for 5 on a pay line, the warrior with a beard and the pig symbols both pay 20x the spin bet for 5 on a pay line.

Look out for the ‘Monkey King’ wild symbol because this will substitute for any of the Quest to the West video slot regular symbols as well as kickstart your pathway to big payouts via the re-spins bonus feature.

Monkey King Walking Wilds: The entire bonus feature on the Quest to West slot game depends on the Monkey King wild symbol. Land it 3 times on the reels to trigger a series of re-spins in the ‘Quest to the West’ feature.

Meter of the Heavens: When the meter on the West of the reels is filled with a total of 15 Monkey King Wilds, you will be rewarded with an instant 1,000x your spin bet prize.

You bet between 0.04 and 80.00 per spin on the Quest to the West online slot game. On Betsoft’s website, the slot’s RTP is officially a whopping 97.53% which is remarkably high for any online slot game. You are more likely to collect lots of medium size wins thanks to the re-spins feature while the jackpot win is going to take a long-time trigger. Therefore, this is a medium-high variance slot game from Betsoft Gaming.

The Quest to the West online slot gives players a unique re-spins bonus feature. Players will be putting all their faith into the divine Monkey King because he is the ticket to big wins up to 1,000x your spin bet. Using the wild symbol as the trigger for the bonus re-spins feature, the re-trigger, as well as the trigger for the slot’s fixed jackpot pay-out.