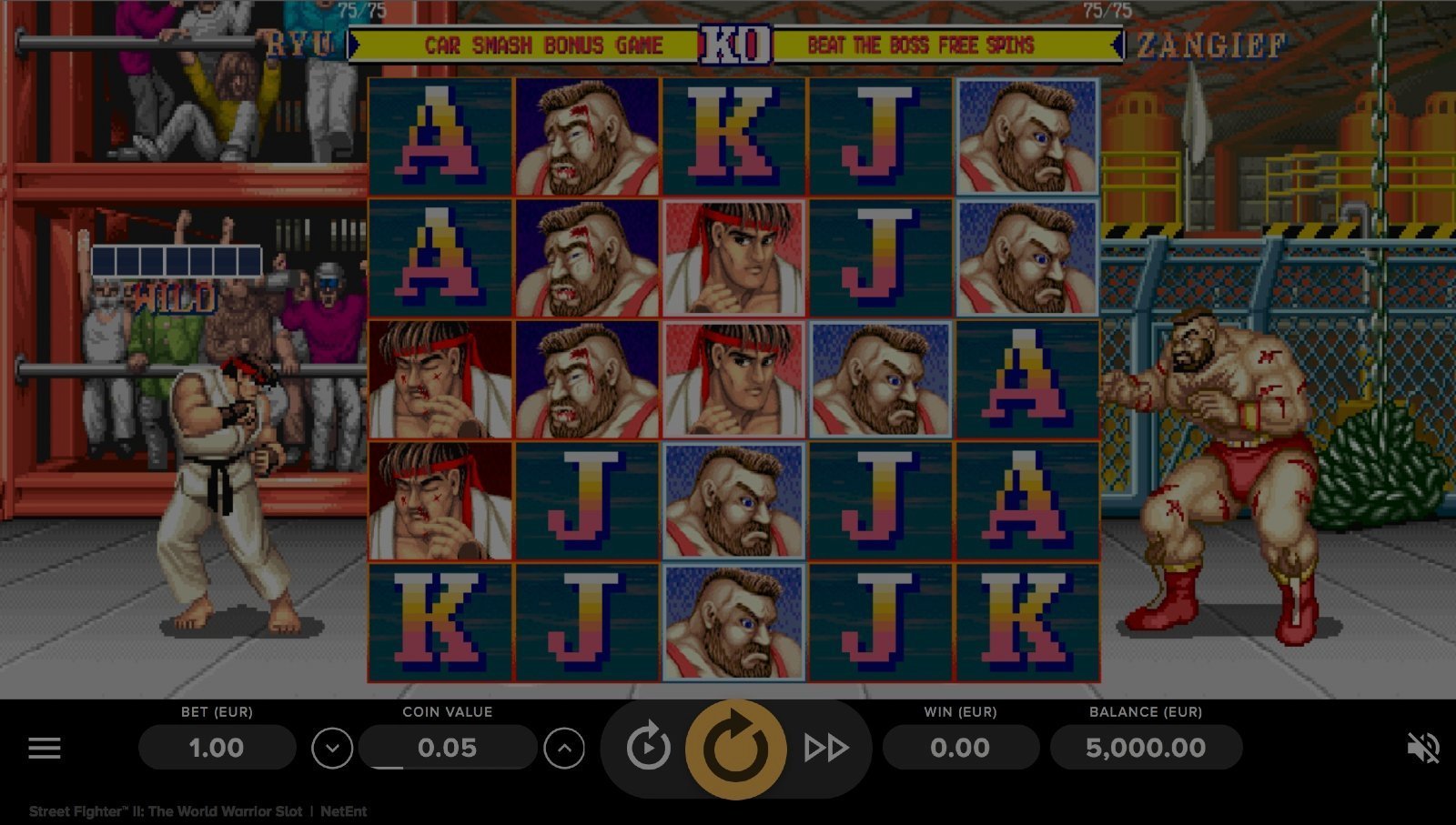 Revisit the early days of Takashi Nishiyama and Hiroshi Matsumoto’s 1987 arcade and 1991 game’s console hit game Street Fighter on a cluster pays slot. Whether you were born when this game hit the gaming market or you are new to the Street Fighter dynamic, this slot is going to blow your mind as you spin in special ‘fight scenes’, boss levels, and free spins.

Street Fighter II was a revolutionary fighting game that was prevalent throughout the 1980s and 1990s. Martial artist characters with different skills and abilities battle out versus one another and against big bosses like M.Bison to become crowned as the World Warrior supreme.

What’s great about this slot game is that NetEnt has not tried to make the graphics too fancy. Instead, the aim was to keep the old style pixel design used on the original arcade and game console version. Of course, as this is a fighting game, Street Fighter II World Warrior is bustling with animated fight scenes, exploding symbols, moving reels, and it even includes animations of the original Street Fighter characters’ special abilities.

If you were wondering whether NetEnt managed to include the original soundtrack and sound effects, then good news because you get both!

You will be landing clusters of symbols on 5x5 reels. Each time you land a cluster win of between 4 and 16 symbols, the cluster of symbols explode and new symbols will drop in potentially forming more cluster combination wins giving you multiple payouts from just the one spin!

While all the reel action unfolds, in the background the street fighter characters will be battling it out to award special bonus feature prizes.

Battles: As you play through the game, there will be street fighting battles. Choose from 8 characters to fight the battle for you.

Wild Gauge & Combo: Full up the meter on the characters in the background and when a losing spin is produced, the fighter will use his/her special powers to fill up the reels.

Beat the Boss Free Spins: You have 4 levels to beat Balrog, Vega, Sagat, and M.Bison worth x2, x3, x5, and x10. Each time you beat a boss, your multiplier for the free spins game increases. If you beat M.Bison, you get a 100x spin bet multiplier.

Insert Coin Gamble Feature: If you lose versus the Big Boss, you may be given the option to pay some of your winnings to restart the battle.

Car Smash Bonus Round: This is an interactive bonus where you will use hotkeys or touch controls to destroy the car using the Street Fighter Character Ryu. When the car is destroyed you will be awarded coin wins.

Street Fighter II The World Warrior online slot is quite simply going to become one of the most played slot games worldwide. It may not appeal to the younger generation that did not have the pleasure of battling it out versus friends in the dual player mode or versus the bosses and other Street Fighter characters in the single-player journey, but this slot will be popular amongst those old school gamers in their 30s, 40s, 50s, and 60s.