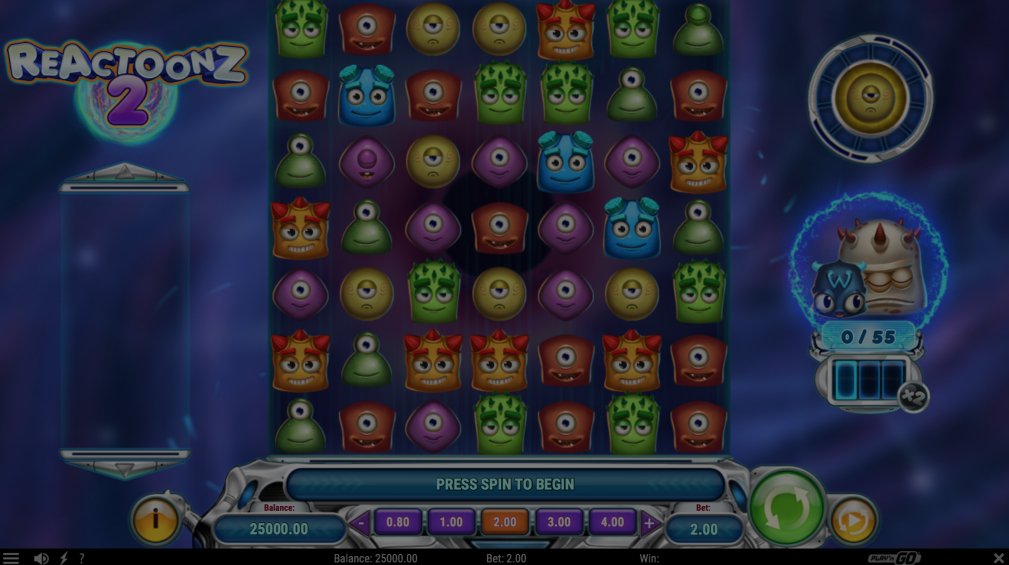 The eagerly awaited sequel to Play’n Go’s flagship title does not disappoint. It might look and feel similar, but there are some big changes, including an additional collection meter, changes to the feature modifiers and an increased top payout of 5,083x. The Reactoonz 2 video slot definitely requires a look if you loved the original!

Once again, you come up against the cute-looking but extremely deadly Reactoonz alien goons. Featuring one, two, or even three eyes, these goons have the power to unlock some almighty payouts!

At first glance, the Reactoonz 2 slot looks identical to the original. In many ways, it is, especially in terms of the same quality graphics and animations. There is the addition of another collector meter to the right of the reels, but other than that, the game looks very similar to the original Reactoonz. The soundtrack is a bit different and you get a bunch of new crazy sound effects as you try to keep up with the madness occurring on the reels.

Reactoonz 2 uses the same cluster pays and cascading symbols reel mechanics as the original. When you create clusters of 5 or more matching symbols, you receive a payout before those symbols disappear. New symbols fall into the vacant spaces, which can create further combinations.

As you collect multiple wins from a single spin, two collection meters to the right of the reels fill up. Once full, you trigger special features that can help you create some monstrous wins. As for the symbols, these are the same cute characters from the original slot. There is a mix of low and high paying symbols. Determining which is which is easy because of the number of eyes they have. Two-eyed aliens are the high-paying symbols while the one-eyed aliens offer the smaller payouts.

The payouts earned from landing clusters of 15 or more matching symbols:

Fluctuating Symbols: At the start of each spin, a symbol is randomly chosen as a fluctuating symbol. If you form winning combinations with this symbol, it fills the fluctometer at the right of the reels while also creating an electric wild on the grid.

Quantumeter: Below the Fluctometer is the Quantumeter which fills up when you land winning combinations using all other symbols. You can fill this up across 4 levels with each bringing its own feature.

Wild Pair Explosion: If two electric wilds land next to each other, they remove all symbols except wilds from the grid, which allows new symbols to drop into play. If you have two electric wilds on the grid but they are not adjacent, only the symbols between them are removed.

Reactoonz 2 is a hectic but hugely entertaining slot in the same vein as the original. Once you make sense of what is going on, you’ll have a blast with the numerous bonus features you can trigger. If you loved the original, you’re going to love the Reactoonz 2 slot!