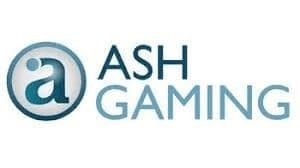 Founder Chris Ash started the casino software company Ash Gaming back in 2000. However, the provider did not make its formal debut until two years later. In the beginning, they focused mostly on creating unique slot games that were different than what other software developers were offering. That creative approach is one that is still apparent in its slot games even today.

Later, Ash branched out into table and instant win games for online casinos, using the same innovative approach they took to their slot games. This allowed them to quickly earn a reputation for being one of the most creative gaming software providers out there.

Their rapid growth made it possible to achieve massive equity in a relatively short amount of time. In fact, the company was purchased by Playtech in 2011 at a cost of between $23 and $30 million USD. They continue to produce slots under their own name, but have added the Playtech logo to a few of them. The merger allowed Playtech to begin distributing Ash games to some of their existing casinos, making them available to a wider audience than before.

Fairness in gaming continues to be a primary concern of Ash Gaming and of Playtech. Accordingly, all of their casino games have earned certification from the e-Commerce and Online Gaming Assurance (eCOGRA) organization. A non-profit entity, eCOGRA certification is voluntary, and shows that a software company has taken additional measures to ensure the safety and integrity of their games.

The company is based in the UK, which accounts for a British theme to many of its online slots. However, they have a wide variety of other themes available as well, and will therefore appeal to a very large audience. In addition, some of their casino games are very simple to play, while others are quite complex. This means their games are attractive to seasoned and beginning gamblers alike.

Players can also wager varying amounts on Ash Gaming slots. So those who are high rollers as well as virtual gamblers with only a limited budget will find games that suit their risk level. They currently offer more than 50 different slot games, many of which also come with multiple paylines and progressive jackpots. Some of their most popular slot titles include:

Ash Gaming established itself early on as a creative developer of casino games with rich graphics and intricate details. They’ve cemented their reputation even more through their acquisition by Playtech. Despite having been bought out, the company has maintained its own identity and has only become stronger as a result of it.

By choosing Ash-branded games, players can be sure they are getting a high quality game from a fully-vetted casino. Gamblers could need to download some of their older games, but reviews show that the playing experience might well be worth a little extra time to do so.