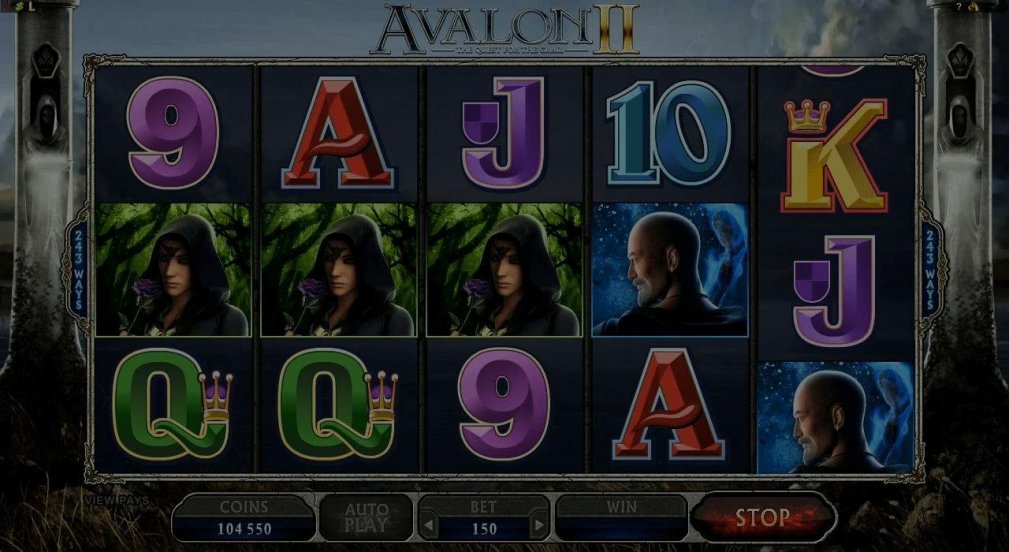 Avalon II provides a dynamic way for players to feel as though they are part of an adventure. Those who enjoy themed slots and also desire a good bit of variety in their games may want to give this one a try.

This game is an enhanced version of Micrograming’s original Avalon game. Like its predecessor, it is based on the legend of King Arthur. In the game, players are transported to the legendary Isle of Avalon during medieval times. It features the Knights of the Round Table, as well as royalty and medieval warriors. Along with King Arthur, they embark on a quest to restore the Holy Grail to Avalon.

Avalon II is a sequel, and Micrograming has made every effort to ensure that this game’s sound and graphics are an improvement over the original. One way in which they have done that is through character animation. During a winning spin, character symbols will light up, then twirl or slash their swords for dramatic effect. In addition, the musical score helps build suspense to keep players intensely involved in the game.

After placing their bets, gamblers will either spin the reels by clicking a button or choosing the autoplay feature. There are several ways to come up with a winning combination, including with the use of an Avalon II symbol, which doubles as a wild symbol. Coming up with five Avalon II symbols produces the highest payout of the game, which is 66x the bet.

The goal during this game is to unlock one of the bonus rounds to get to the Isle of Avalon. There, players can finally complete their quest for the Holy Grail.

Two bonus feature are available in the base game.  The first occurs when the character Merlin appears at random, allowing players to earn either a multiplier or a cash bonus. The highlight of the game is the Grail Bonus feature, which provides access to one of eight different bonus games. The Grail Bonus feature is activated when three Grail symbols occur during any one spin. After players have activated the Grail Bonus a certain number of times, they can then unlock even more bonus rounds.

The Lady of the Lake symbol acts as a scatter, and will unlock 12 free spins while providing a multiplier of up to seven times. When a treasure chest symbol appears during a free spin, it acts as an additional wild symbol.

This is a medium variance slot that varies between smaller and larger payouts. Some players remark that they tend to notice bigger payouts when playing one of the bonus rounds. Higher payouts are possible, as the maximum win per spin can be as large as €121,500 when betting the maximum amount. Bets can range anywhere from 1.5 to 7.5 coins per line.

The Return to Player is 95.92%, which is somewhat lower than average for video slots. To win a higher amount, gamblers will need to activate the Grail Bonus. The different bonus rounds available in this game make it possible to win up to four times the amount wagered.

Microgaming has taken what was already a great game and improved on it tremendously. Avalon II provides more ways to win and multiple methods for gamblers to interact with the game. For players who enjoy the storyline and want to feel part of the quest, Avalon II will provide more excitement than its predecessor. However, anyone who is new to slots may enjoy the interface and ease of play as well, particularly if they also like video games.