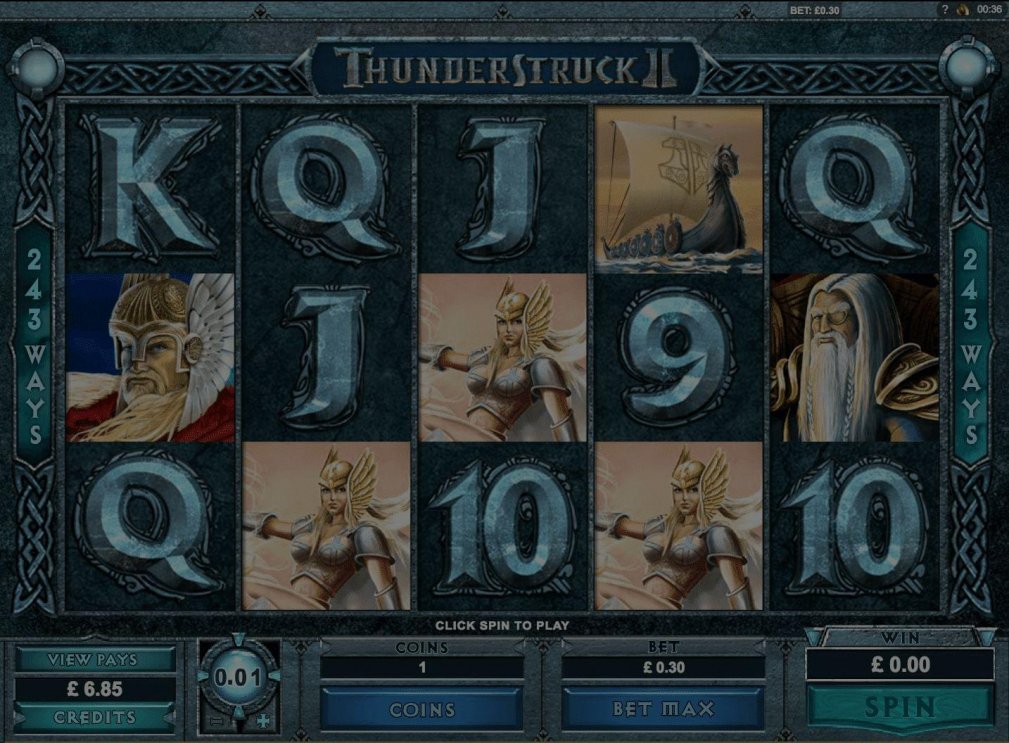 The game is based upon the ancient city of Asgard and Norse god Thor. In Thunderstruck II, there are four main characters: Thor, Odin, Valkyrie, and Loki. These characters can help you win up to four times your bet or unlock up to 25 free spins.

This casino slot comes with symbols that resemble playing cards, as well as a few other ones from the original game such as Thor’s hammer. It features sound effects related to storms such as lightning bolts and thunder. When there is a winning spin, you will see and hear a stack of coins falling. Dramatic theme music plays in the background, adding an element of intensity and suspense to this casino game.

Thunderstruck II features enhanced animation in the way of dark clouds that move over top of the reels and characters that leap out from the reels while they are spinning. In particular, characters are likely to pop out whenever you encounter the Wildstorm feature.

To begin playing, choose the number of coins to bet per line. To make the maximum wager, click on the “bet max” button at the bottom of your screen. Hit the “spin” button in the lower right-hand corner of your screen to start the reels spinning. You can also select the auto play feature to automatically spin the wheel five or ten times. After each spin, you can keep track of your credits by checking the box in the lower-left hand corner of the screen.

The Thunderstruck II symbol serves as a wild symbol, or you may also randomly encounter the Wildstorm feature. When this happens, up to five reels at once can turn wild. This slot is perhaps best known for its Great Hall of Spins, which is accessed whenever you land on three or more Mjolnir or scatter symbols. From there, you can access even more features based upon the character you unlock:

This casino slot will allow you to bet between one and ten coins per line, and achieve a jackpot of up to 6,000 coins. This is generally considered a medium variance slot, so you may experience brief periods of time without a winning spin. However, your winnings will be higher than if you were to experience more frequent wins. Thunderstruck II comes with a Return to Player of 96.65%, which is about average for Microgaming slots.

Microgaming has taken what was already a very popular casino slot game and greatly improved on it. By adding new features and ways to win, they have managed to retain fans of their original Thunderstruck game in addition to attracting new ones. However, even with the improvements many gamblers claim that Thunderstruck II still contains rather basic graphics and symbols. At the same time, they are pleased with the improvements Microgaming has made over its original Thunderstruck slot. You’ll find this game available at reputable online casinos such as Gate 777, SlotsMillion, Jackpot City Casino, and CasinoChan.