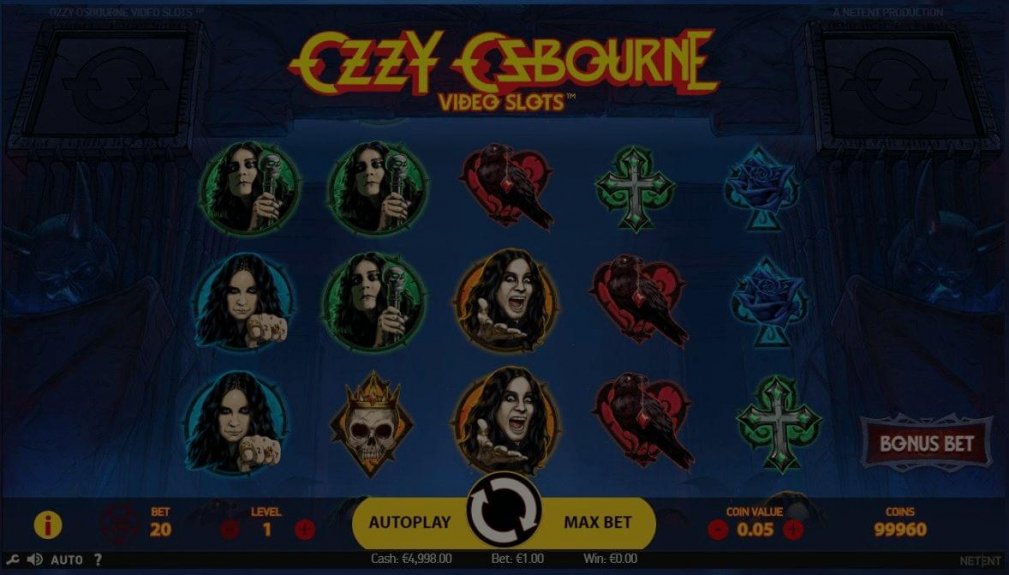 Themed on the legendary Black Sabbath lead singer Ozzy Osbourne, Ozzy Osbourne the video slot game is made by NetEnt and features plenty of Bonuses, a Symbol Charge-up Feature to trigger great features and a Bonus Bet Button which will increase your Return to Player rate!

Its highly unlikely that you’ve never heard of Ozzy Osbourne, self-proclaimed Prince of Darkness! He’s a heavy metal superstar, a famous TV rock star dad, and at online casinos, he's NetEnt's legendary slot game, Ozzy Osbourne! Launched at the end of 2019, this unique branded game is based on Black Sabbath and Ozzy Osbourne. The game offers an electrifying gaming experience and illustrations of the metal performer bring his legacy to life.

The game’s backdrop is a stage with electricity rushes to light up the screen and when the game begins, the Prince of Darkness is seen sitting on his throne while Mr Crowley pierces through the speakers. The game’s symbols have been expertly illustrated and the top-quality visuals, animations and special effects animate the game every step of the way.

The Wild is the bat and when it lands on the reels, it helps to form winning combinations. The Wild also substitutes all the game’s regular symbols and can appear anywhere on the reels during the main game, re-spin and Free Spins round.

Ozzy Osbourne offers many ways to earn big wins in the base game, and the Free Spins feature is one of the ways. Land 3 Scatters on reels 1, 3 and 5 and you’ll be awarded 4 Free Spins. The Symbol Charge Up feature is triggered before every Free Spin begins and applies modifiers to the symbols for even more Free Spins. The modifiers stay until the end of the Free Spins round to deliver more multipliers, wilds and symbol upgrades for top rewards!

Coin Win feature: Symbols appearing on the reels award a coin win equivalent to a three of a kind win multiplied by the bet level

Wild feature: Land a Wild on your screen during the Symbol Charge Up Feature, and every symbol on the reels will transform into a Wild.

Upgrade: Symbols transform into other symbols.

The minimum stake for every spin is just 0.20 but the bet levels and coin values can be raised from 0.01 to 0.50 per pay line until you're playing with as much as 100.00 per spin. The Bonus Bet button lights up the demon's eyes and triggers more bonus rounds and higher wins.

Ozzy Osbourne has its Return to Player rate set at 96.30% but can be increased to 96.67% when the Bonus Bet Feature is activated. Ozzy Osbourne is a High volatility video slot game which means bigger wins less frequently. With the Bonus Bet feature, players can double their payout and get back up to 2500 times their stake.

Launched in November 2019, this fantastic branded game is based on Black Sabbath and Ozzy Osbourne. The video slot game is designed as a 1980's comic book and the reels are set against a temple flanked by two demonic creatures. During the game, the sonic sound of lightning strikes across the top of the game and deposits Wilds onto the reels haphazardly. Ozzy Osbourne is set to become a firm favourite for anyone with a hankering for some excitement and big wins.