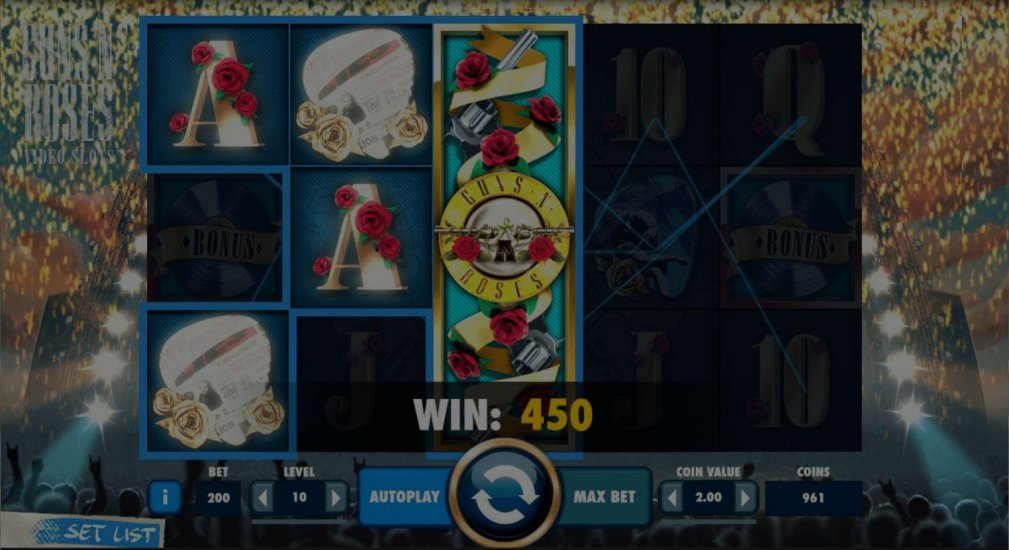 The Guns N' Roses slot game is one that fans of the notorious rock and roll band will delight in playing. Its vibrant theme and graphics will leave players feeling as though they have just left a rock concert.

The game is based around the legendary rock band Guns N' Roses, and was released back in 2016 to commemorate the group’s 30th anniversary. The scene itself is set in a concert hall during the 1990s, and therefore has a retro feel to it. Fans of the group can experience a bit of nostalgia while reliving some fond memories of their past. However, even younger players who may not have grown up with Guns N' Roses will find it entertaining as well.

The game provides the feel of being at an actual Guns N' Roses concert, and will even allow you to choose from a playlist of the band’s songs. The symbols themselves represent band members as well as the Guns N' Roses logo. The logo symbols are wilds that substitute for any other symbol, and will turn an entire reel wild when it lands there.

To add to the concert feel, you can experience stage lighting as well as the roar of the crowd when you win. Band members Axle Rose, Slash, and Dizzy Reed make plenty of appearances to thrill and delight their fans as well.

This game is played much like any other slot game. Gamblers will place their bets and spin the wheel in hopes of coming up with a winning combination. Clicking on the arrow at the bottom of the screen will start the reel spinning, or players may also access the autoplay function.

The Axle Rose symbol pays the highest, followed by the other band members. The Guns N' Roses symbol acts as a wild, while the LP record image is the game’s scatter symbol. The remaining symbols mostly resemble playing cards that are decorated with the Guns N' Roses logo.

This game includes random bonuses that are activated when you achieve three bonus symbols on an odd-numbered reel. In addition, there are multiple ways to unlock free spin such as through the Crowd Pleaser click-through bonus game. Gamblers can also earn free spins whenever an Appetite For Destruction wild appears on the game or when three band member symbols appear.

Players who unlock the Legend Spins feature will have the entire third reel turn wild. The Solo Multiplier feature will allow a winning spin to multiply anywhere from 4x to 10x.

The Crowd Pleaser bonus game gives players the opportunity to pick different instruments, all of which have a different payout amount. There are three levels of this bonus game, giving gamers the chance to earn free spins in addition to increasing their winnings.

With an average Return to Player of just under 97%, this slot game is on par with others from Microgaming. Players can choose between $.01 to $2.00 per line, or may click on “max bet” to wager the maximum amount possible. Overall, this slot appears to have a fairly low variance, paying out smaller amounts of money fairly consistently. The game also lacks a progressive jackpot, so large winnings are probably not likely.

With its stunning features and high sound quality, the Guns N' Roses slot game is one that any hardcore music fan will find delightful. The soundtrack will keep you entertained while you enjoy amazing graphics, bonus features, and free spins galore. Even those who are not necessarily fans will find this game compelling and easy to play.