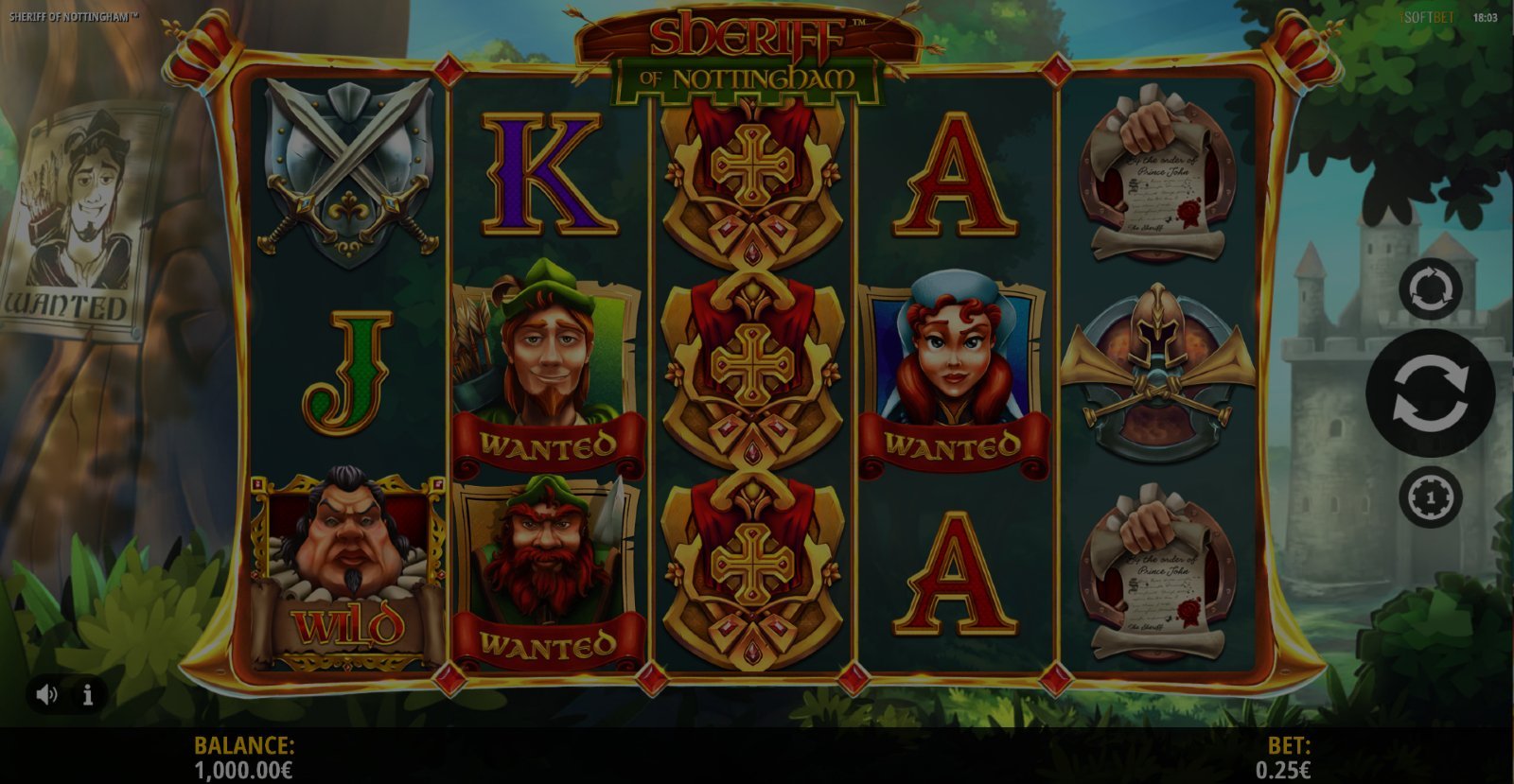 The Sheriff of Nottingham online slot gives you the chance to empty the Sheriff’s coffers by landing free spins, re-spins, in-sync reels, bonus symbols, and stacked wild symbols that could result in you banking 1,000x your spin bet!

It has long been known that the Sheriff of Nottingham was one of Robin Hood’s greatest foes. On this old English slot theme you will be spinning in as many combination wins and features as possible on modern reels so you too can happily become another one of the Sheriff’s arch enemies by relieving him of his treasures just as Robin Hood did.

This is a beautifully designed mobile-first slot with clear graphics and special effects added to both the reels and backdrop. The forest and castle scenery depict 13th century Nottingham using clear and precise artwork. On the reels, symbols use animated effects to bounce in position, there is a neat in-sync reels feature that uses impressive graphics, and while you are playing, you will be able to chime along to the calm English folklore theme song.

The reels on the Sheriff of Nottingham video slot use a 5x3 format with 25 pay lines with bonus, wanted, wild, and regular symbols on the reels. The bonus symbol triggers free spins, the wanted symbol activates re-spins, and the stacked wildcard symbol can substitute for regular symbols to help create symbol combination wins.

If you land the Sheriff of Nottingham caricature wild symbol on a pay line 3, 4, or 5 times, it becomes a symbol combination paying out 20x, 10x, or 2x the total spin bet. There are then 8 additional regular symbols which pay out the spin bet multipliers, shown in the bulleted list below, for 5, 4, or 3 symbols on a pay line respectively:

Combination wins only qualify if the same symbol type lands on reels 1-2-3, 1-2-3-4, or -1-2-3-4-5. The wild symbol can complete or extend any regular symbol combination by landing on any of these reels.

Robin Riches Free Spins: Land the bonus symbol on reels 1, 3, and 5 to trigger 8 free spins with in-sync reels. The middle 3 reels will have exactly the same symbols spinning in the same position. This means every winning spin guarantees a minimum of a 4-symbol combination payout.

Pick a Royal Letter: This feature will trigger randomly giving you 3 letters to choose from.

As for variance, there are plenty of ways to get paid via free spins or re-spins and the stacked wild helps in both the free spins and re-spin features as well as during the base game. Plus, all the regular symbols payout decent multipliers of the spin bet. Accordingly, this is a medium variance slot game.

Those that know iSoftBet slots well will already be expecting high-end graphics and animations on a colourful and superbly designed slot game. For those new to online slots, the Sheriff of Nottingham slot game is the perfect example of how an online and mobile video slot game should look. Although wilds, free spins, in-sync reels, and re-spin features are found on many other online slot games, thus this slot is not offering anything new in this department, the Sheriff of Nottingham video slot’s gameplay and design give slot players another entertaining slot theme to choose from!