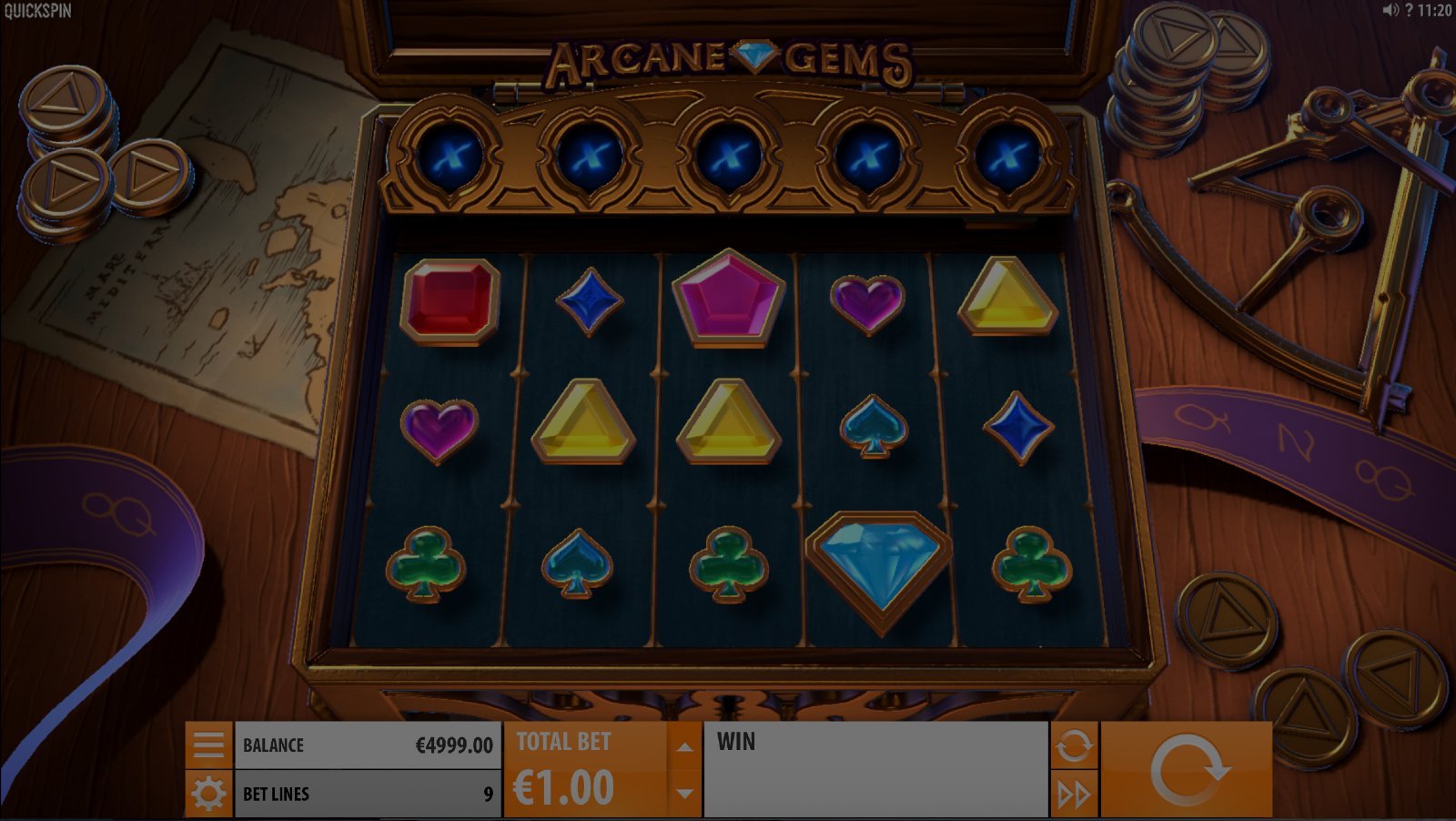 The Arcane Gems online slot links up symbols on any reel using an adjacent pays feature meaning no more ‘reel 1’ combinations. Link up symbol wins from reels 1, 2, or 3 to trigger a re-spin feature that progressively increases the amount paid from a single winning spin. You will also be locking symbols on the reels in exchange for multipliers worth up to 25x the win.

The theme of the Arcane Gems video slot is based around an adventurous treasure hunt inside a box filled with precious jewels, gems, diamonds, and other valuable items.

Quickspin has opted for a slightly different look to traditional mobile/desktop slot games while keeping the same 5x3 grid system, 3D graphics, and animated effects used with most video slot games. There is a large backdrop that shows items that you would expect an adventurer to own which is to set the slot’s theme while the reels are cleverly set inside a treasure box full of precious stones. You also have to love the mystical theme tune and magical sound effects!

You can unlock multipliers with locked symbols, winning combos can begin in any reel, and there is an awesome re-spin feature triggered after every win.

Gameplay options include quick spins and autoplay. There are also different configurable options depending on whether you are playing on a tablet, smartphone, or desktop.

Adjacent Play: Most slots require the first symbol in a combination begins on reel 1. On the Arcane Gems online slot, symbols can start on any reel to form a combination. The only rule is that the symbols are on adjacent reels.

Arcane Lock Mechanics: This feature is triggered each time you land a winning combo during the base game. The highest winning symbol will lock in place on the reels and a respin will ensue. The process repeats itself until a re-spin produces a non-winning spin.

Arcane Multipliers: When a full reel is filled with locked symbol random multipliers between 2 and 5 are awarded. With multiple reels, the multiplier can reach up to 25x.

Arcane Gems is another 5x3 slot game with re-spins and multipliers. However, there are some unique features which include the refreshing ‘Adjacent Pay’. This means you no longer have to link symbol combinations up from reel 1. Instead, this feature is much like cluster pays slots giving you more chance to connect combination wins. Add multipliers on top and it comes as no surprise that Arcane Gems not only pays out quite regularly but is also generous with its payouts.