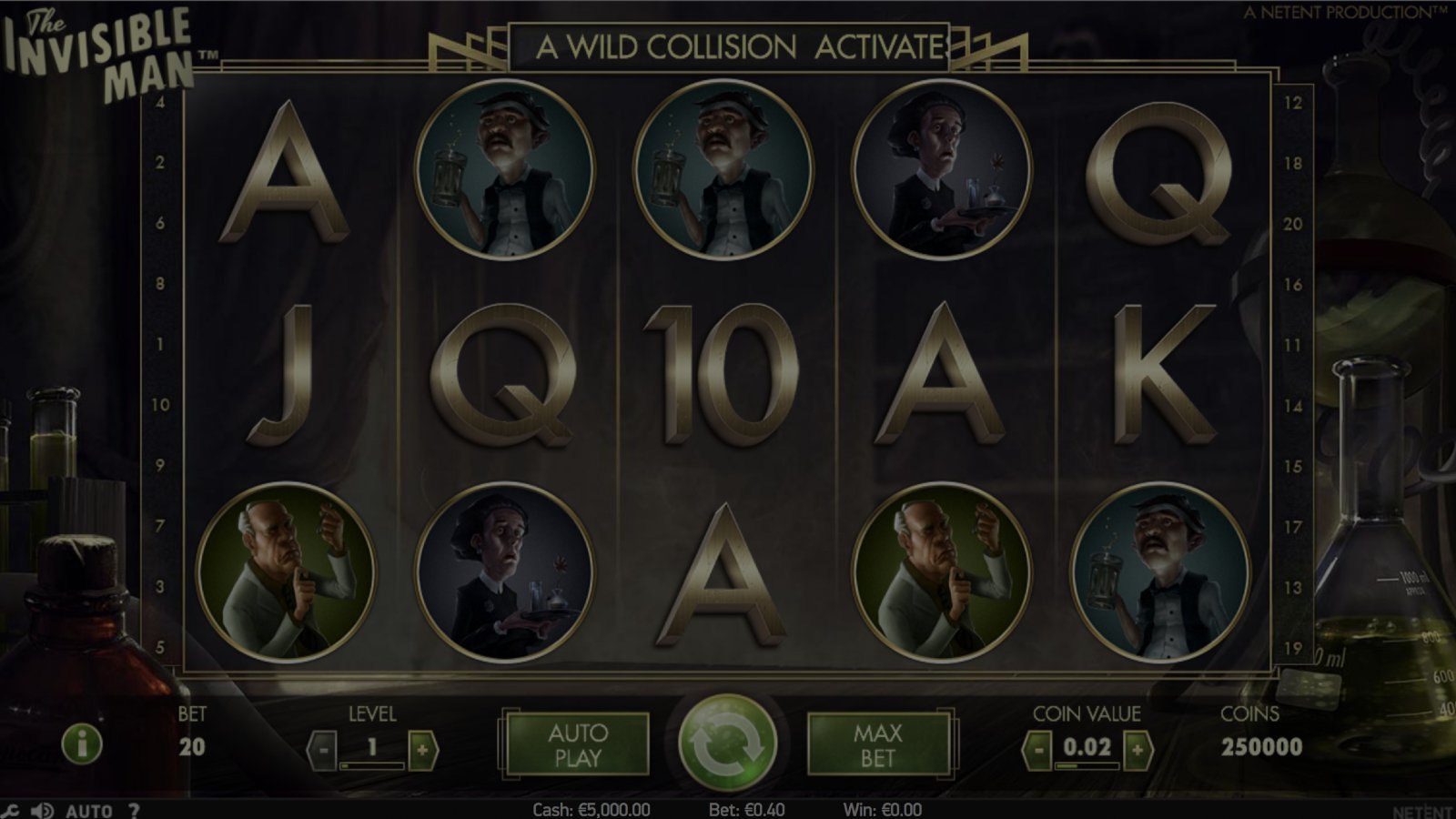 The Invisible Man is based on the classic novella released way back in the 19th century by H.G. Wells. The slot game is packed full of features and references to the classic book and hit-movie from 1933, with free spins and powerful Wilds that bring a range of multipliers and cash prizes.

The intro video will give all of those new to the Invisible Man story a bit of background information, but to sum it up in one sentence: the police go after a mad and dangerous scientist by the name of Griffin who has created a secret formula that makes him invisible to the world.

The game is based around two separate Wild symbols, Police and Griffin, and these can be used to activate the free spins and big prizes within the game. Additional bonus rounds are available throughout the main feature and you never quite know what will happen next, which all makes for a very entertaining slot game.

The appearance comes across as dark and mysterious with the background set within Griffin’s secret science lab. Bubbling formulas and bottles of potions fill the screen and the symbols are all designed with a low contrast. You’ll see why this dark appearance works so well when you win a prize, the symbols light up in a illuminous green colour which brings the winning payline to life.

The soundtrack for the base game fits the mystery theme perfectly and quickens up whenever a feature is activated which all adds to the excitement. The animations that have been added throughout the game also help to bring an entertaining and engaging gameplay.

Invisible Man is set out across five reels and three rows with a total of 20 paylines available to match up your symbols, which are based on the classic movie and book. The low-value symbols are the classic playing card values of 10-Ace and the higher value symbols take the form of the Invisible Man characters; Mrs Hall, Mr Hall, Dr Cranley, Arthur Kemp, and Flora Cranley. The last of which holds the biggest base game prize of 500x your stake.

The game is based around the double Wild symbol combination of the Police and Griffin icons and these substitute all symbols during gameplay. They also hold the key to the free spins feature and the extra bonus games found deeper within the game. The Police Wild lands on the first reel and moves one reel to the right with each respin until it disappears off the far right reel. The Griffin Wild acts the same but starts at the fifth reel and moves across to the left and both give you the chance to pick up bigger payline combinations.

If you manage to find the two Police and Griffin Wilds moving towards each other then you’ll be rewarded with 10 extra spins when they finally merge into one, with the possibility of four more spins if you find the merging Wilds again.

During the free spins feature there are two meters above the reels and these relate to the number of Police and Griffin Wilds found during the free spins. If you fill either of the 8-space meters then you’ll trigger the special bonus round of that particular Wild - Police Spins Bonus or the Griffins Rage Bonus.

The Police Spins Bonus is based on random burning Wilds that are active for each of the three free spins. The Griffins Rage Bonus takes you to three separate locations with a “pick and win” style feature with cash prizes and up to 4x multipliers available. The biggest prizes in the game can be found here with 188x your stake in the Griffin bonus and 1,000x your stake in the Police bonus.

The minimum bet per spin on The Invisible Man is $/€0.20 and this rises up to a maximum of $/€100 per spin in total. The RTP is 96.30% with medium to high variance. This means you will find some luck with the standard payouts and bonus rounds will get activated every so often, which is where you’ll need to be if you plan on winning the game’s top prize.

The Invisible Man is a brilliant example of a movie-themed slot game with great attention to detail and multiple bonus rounds to activate as you spin the reels. The gameplay keeps you gripped with engaging features and animations, plus the top prize of 1,000x your stake will surely attract many slots players to this slot hit from NetEnt.