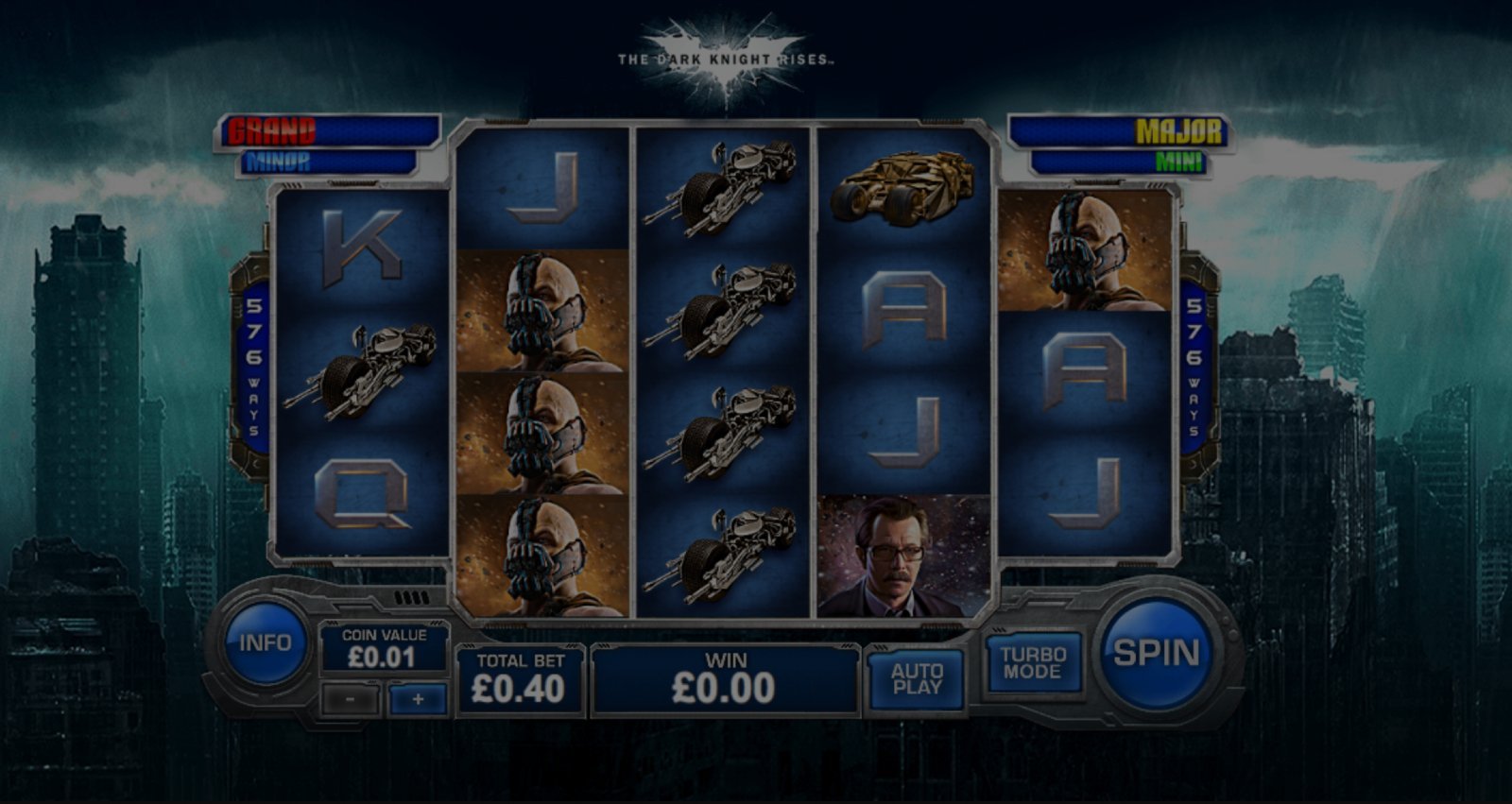 The Dark Knight Rises video slot title brings forth a progressive jackpot slot using yet another awesome Batman sequel. It comes with Cinematic Spins via its 3D design and is jam-packed full of features such as free spins, stacked wilds, expanding wilds, and multipliers.

The Dark Knight Rises is themed on the famous movie 2012 superhero movie in which Bane, a terrorist, and his cunning cat burglar partner cause chaos in order to bring Batman out into the open. This storyline plays on the reels using symbols, feature bonuses, and cinematic film clips that come directly from the blockbuster movie itself.

After playing the Dark Knight Rises video slot game, you will be hard pushed to find another slot so well-designed. Brilliant animations, HD cinema clips, and crystal clear symbols bring the Batman theme to life along with numerous sound effects that derive from the movie and characters in the movie.

After playing the Dark Knight Rises video slot game, you will be hard pushed to find another slot so well-designed. Brilliant animations, HD cinema clips, and crystal clear symbols bring the Batman theme to life along with numerous sound effects that derive from the movie and characters in the movie.

When you trigger the free spins feature, you will see an impressive animated fight between Bane and Batman. Getting the wild reel feature sparks off another animated scene in which the reels burn away to give you reels full of wilds, bats fly out of regular wild symbols, and the symbols made up of characters in the film will also show off their own animations when you link them up on the reels.

This is an absolutely awesome slot game. Breathtaking isn’t the word as there are just so many ways smash in big wins. Microgaming has really gone all out to match the entertaining action in the blockbuster movie and cram it all that 5 reels.

When the reels spin, reel life featured scenes from the movie come to life on the reels. Each Cinematic spin is like watching the movie unfold as the characters come alive. To line up symbols, you need the first one to appear on reel 1. Then as long as the next symbols are on adjacent reels lining up from left to right, you will get paid for symbol combinations.

Symbols include characters from the film such as Batman, Comissioner Gorden, John Blake, Miranda, Catwomen, and Bane. There are also A, K, Q, and J symbols. The highest paying is the Batman symbol followed by Bane each of which can pay up to 250x and 225x your spin bet.

To get yourself emersed into the action, simply set your ‘total spin bet’, then click spin or set auto spins.

Progressive Jackpot: Running into the progressive jackpot is a random affair. At any time in the game, the Bonus Wheel can drop in and give you the chance to win a huge life-changing amount of cash. Spin the wheel and land on 1 of the payouts below. Remember the more you wager, the bigger the win!

Stacked Wilds & Wild Reels: The reels are packed with wilds stacked up to 3 times in a row. The Dark Knight Logo can land on the reel up to 3 times on a reel meaning the entire reel will be wild!

Free Spins: As well as multipliers of your spin bet for landing the scatters, you’ll also get an epic number of free spins. You can choose between 2 free spins games to trigger an animated fight between batman and bane on the reels. Each time one strikes the other the number free spins and multipliers increases.

Heat-seeking wilds can split into 2 when they spot combinations that have not quite linked up and send a wild in between the symbols to link them up and create a winning combination – this can also give you a 6-of-a-kind win. The super-stacked wilds change the usual 3 sets of wilds into 6 and 7 sets of wilds. Multipliers will be applied to every symbol combination win you line up during the free spins bonus.

Symbol Scramble: Any time during the game, the symbols can scramble over the reels by rearranging their order and turning a non-winning spin into a winning one.

You can only make bets on the ‘Total Spin’ bet and the min/max that can be selected is 0.30 to 7.50 per spin. The expected RTP you will get on your spin bets is 96.43%, which is very good for a progressive slot game. You will win big if you hit 3 scatters and trigger the free spins, while on the reels you will notch up symbol combination wins via wilds and symbol scrambles. With all these features combined as well as the chance at a huge progressive jackpot, you are looking at a decent mix of wins making this a medium variance slot game.

While all the action pans out via the huge number of wilds and bonus features busting up the reels, a huge progressive jackpot is lurking in the background just waiting to burst its coffers. Plus, the addition of cinematic spins as the reels play out cinema-like action along with an array of animations makes this slot thoroughly entertaining in all areas.