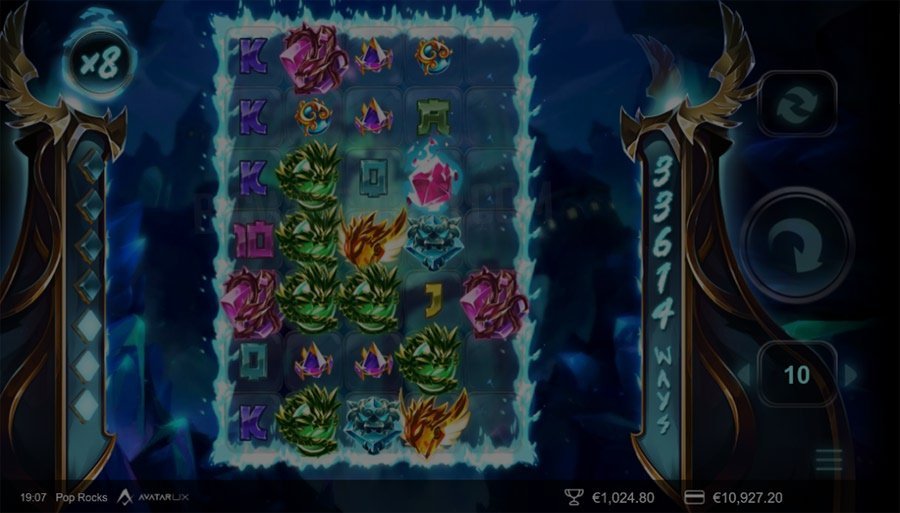 Poprocks is the first video slot in a collection of PopWins mobile and desktop games by Yggdrasil. Hunt down popwins, cascading reels, multipliers, expanding reels, and unlocking wilds on 486 ways-to-win reels that can turn into 33,614 and payout up to 72,188x your spin bet.

You will unleash the poprocks’ arcane powers on this fantasy slot. The more the poprocks pop, the more you win as you explode valuable jewels and pop open valuable features that progressively build up and accumulate bigger wins.

Slots like Poprocks take a lot of thought and effort to design as the shifting speed of the action requires the graphics to keep up with the gameplay, not to mention the huge flurry of features using advanced animations that also need to stay up to speed. Poprocks complex graphical gameplay does all this on both mobile and desktop devices giving players 3D animated action that jumps out of your screen. Plus, awesome sound effects are giving this slot a fantastic add-on that helps to create its fast-paced action-packed atmosphere.

Poprocks video slot gives players a cascading reels style feature on 5x3 reels. However, the reels will expand after every winning combination via an expanding reels feature. You will begin with 5x3 reels and 486 ways-to-win and the reels can expand to become 5x7 reels with 33,614 ways-to-win.

Multiplier: When cascading reels occur, the slot’s multiplier will increase by 1 for every 7 symbols popped.

Cascading Reels: Cascading reels are also known as ‘symbol pops’. When you land a symbol combination win, the winning symbols pop off the reels and 2 new symbols will fill the blank spaces the popped symbols leave behind. The reason there are 2 new symbols is that this feature will trigger ‘expanding reels’.

Unlocking Wilds: This feature only occurs when the reels are 7 high. A wild symbol will be added to a random position on the reels. The multiplier will now increase by x2 each time the 7th symbol pops, and only 1 new symbol will appear from every pop.

Min-max bets come in at 0.10 to 30.00 per spin. Yggdrasil has rated Poprocks gameplay as medium variance and calculated the theoretic RTP as  96.8%. This is a high variance slot game because you will not be sinning in wins regularly. Playing this slot and walking away with a big win takes time and patients. However, once it does start to payout, the rewards will have been well worth sticking around for.

Poprocks is an Avatar UX studios slot title designed in conjunction with Yggdrasil. The pair have an agreement to launch a catalogue of Popwins slots games, and Poprocks is the first to hit Web. It will take quite a few spins to trigger any sizeable wins, and you are likely to go 20 to 30 spins before landing payouts worth talking about. Once the cash starts rolling in, usually via the features and the bonus, you will start to accumulate multiple big wins before the reels settle down again. In between these winning streaks, you should also pick up plenty of smaller wins.