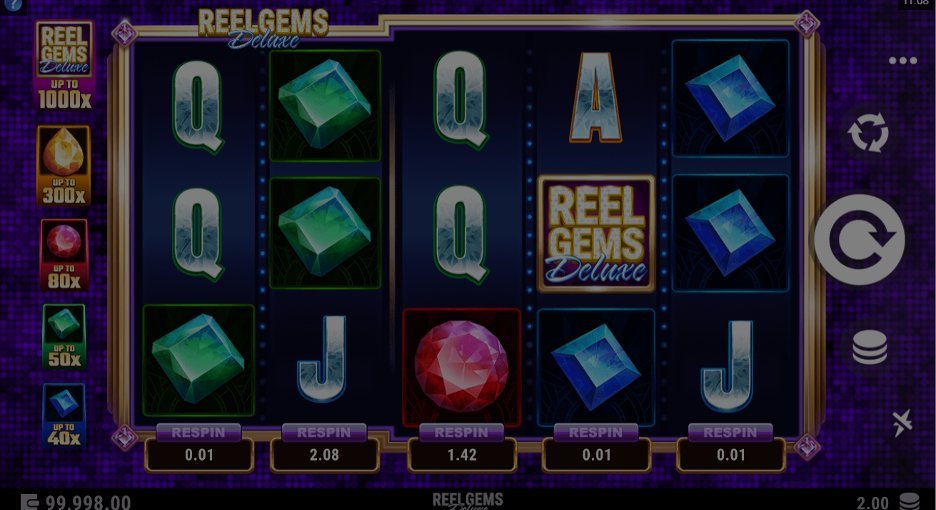 Superbly built by the leading casino game developer Microgaming, Reel Gems Deluxe is a 5x3 delight that can pay up to 1,000x the stake, or £100,000. It's the 10-year-old follow-up to the original Reel Gems, and a nice way to unlock the luck of gemstones. Even though there are just 20 ways to win (as opposed to the original's 243 paylines), additional bonuses and features can result in some fat gains.

The Reel Gems Deluxe slot was initially designed for Microgaming by an indie studio called Alchemy Gaming. It is themed around gemstones, just like the original Reel Gems video slot.

The graphics and animations are not that great, though there's a clear upgrade over Reel Gems. If you're used to eye-popping graphics in your slot games, you will not be impressed at all. It has a pretty basic design, though bright and endowed with gemstones. The track used throughout the game sounds electronic, and it fits the gameplay quite well.

Played on a 5x3 grid, Reel Gems Deluxe uses four low-paying card symbols, four high-value coloured gems, and two feature symbols. The Scatter symbol is a diamond while the game logo serves as the Wild. Both are among the most valuable pieces of this classic video slot.

There are more gems at play, including emeralds, rubies and other diamonds. If you've been looking for that feeling of luxury and elegance, the symbols are quite befitting.

Radiant Spin: Triggered at random, this bonus feature can net you a handsome 1000x multiplier on your stake. It can create up to 20 well-paying combos, with the last two reels getting wilds and gems and the first two being stacked.

Free Spins: Getting 3 or more Scatters activates the Free Spins bonus, awarding you up to 10 extra rounds. Then there's the Radiant Trail, opening you to quicker and bigger gains—from 40x to 1,000x the wager. You move up this trail by landing gems, and it varies according to the count. If you're lucky enough, you may even hit the giant 3x3 symbols, filling reels 3, 4, and 5 for greater returns. Then there are giant wilds and the Retrigger icon. This icon gets you more symbols from the Radiant Trial.

Hyperspin: Similar to other slots from Microgaming, Reel Gems Deluxe comes with the Hyperspin feature, which lets you respin any reel for a price. The price is based on how likely you are to form a winning combination.

You can bet between 0.20 and 100.00, with the maximum payout potential being 1,000x the stake. Reel Gems Deluxe has a medium volatility rating and an RTP of 96.36%, which gives it a rather unbalanced risk-reward ratio.

Building on its 2010 predecessor, the 2020 Reel Gems Deluxe slot attracts with its tasty potential wins during the Free Spins feature. Its high volatility doesn't mean it's hard to hit something valuable. The video slot actually offers a fun thrill paved with monetary opportunities, as it's less volatile than the real high-variance games. Give it a try today and let's see what you think.