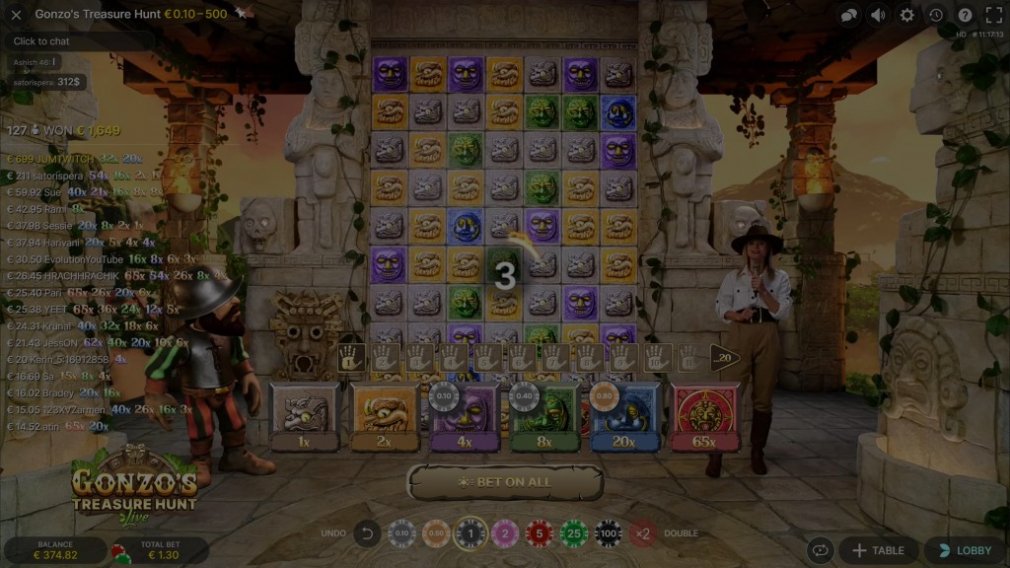 Gonzo's Treasure Hunt is the sequel to the famous series of Gonzo’s video slots, but this time th scene is set inside a live casino gameshow with a massive €/$/£ 1 million max win up for grabs. Place your bet on 1 to 6 numbers and then hunt down your numbers to win multipliers of your bet, while there is always a chance to land a prize drop win multiplying your bet up to 20,000x!

The story of Gonzo the Spanish explorer goes back to the original NetEnt video slot Gonzo’s Quest. He set out on an adventure to discover treasure and uncover the mysteries hidden in the Amazon Forest’s ancient Aztec structures. His adventure has continued into Gonzo’s Quest Megaways by Red Tiger, and now he’s found his way off the reels and into El Dorado city where he is now in a chamber of secrets that beholds an Aztec wall jam packed full of cash prizes!

Gonzo's Treasure Hunt's game is played via a live webcam using Ultra-HD tech. You’ll see a live presenter inside an augmented 3D Aztec world starring Gonzo himself as an animated character. The graphics of the backdrop are pixel perfect, the animated Gonzo character moves almost as naturally as the presenter, and the gameplay us ultra-smooth coming with an easy-to-use betting interface. As for the software that controls the gameplay and interface on your device, this uses HTML5 so you can play on your desktop, tablet, or smartphone. And if you fancy playing in virtual reality, then plug in your VR tech and connect.

One of the reasons Gonzo’s Treasure Hunt is so popular is because Evolution made its gameplay so straightforward. When you open the game, you will see a grid system which is 7x10. In total there are 70 positions on the grid, and each position is referred to as a stone. Next, there is a total of 6 numbers to bet on. Your job, to win cash, is to guess on which stones these numbers will appear.

The Return to Player (RTP) on Gonzo’s Treasure Hunt varies depending on the number you pick. The same applies to the variance. For low variance gameplay, you will need to pick lower numbers such 1 and 2 as these have the greatest number of stones on the wall. For medium variance gameplay, you can pick or combine higher numbers. For example, combining 4/8/20 is a good medium variance bet as this would total 22 stones

Evolution has created the perfect balance by not making this game complex enough to keep things interesting, but simple enough so you don’t get bored. The only grip we have is that you need to be very quick to get you bets down – it would be nice if there was another 5 seconds. Aside from this, Gonzo’s Treasure Hunt is a fun game.