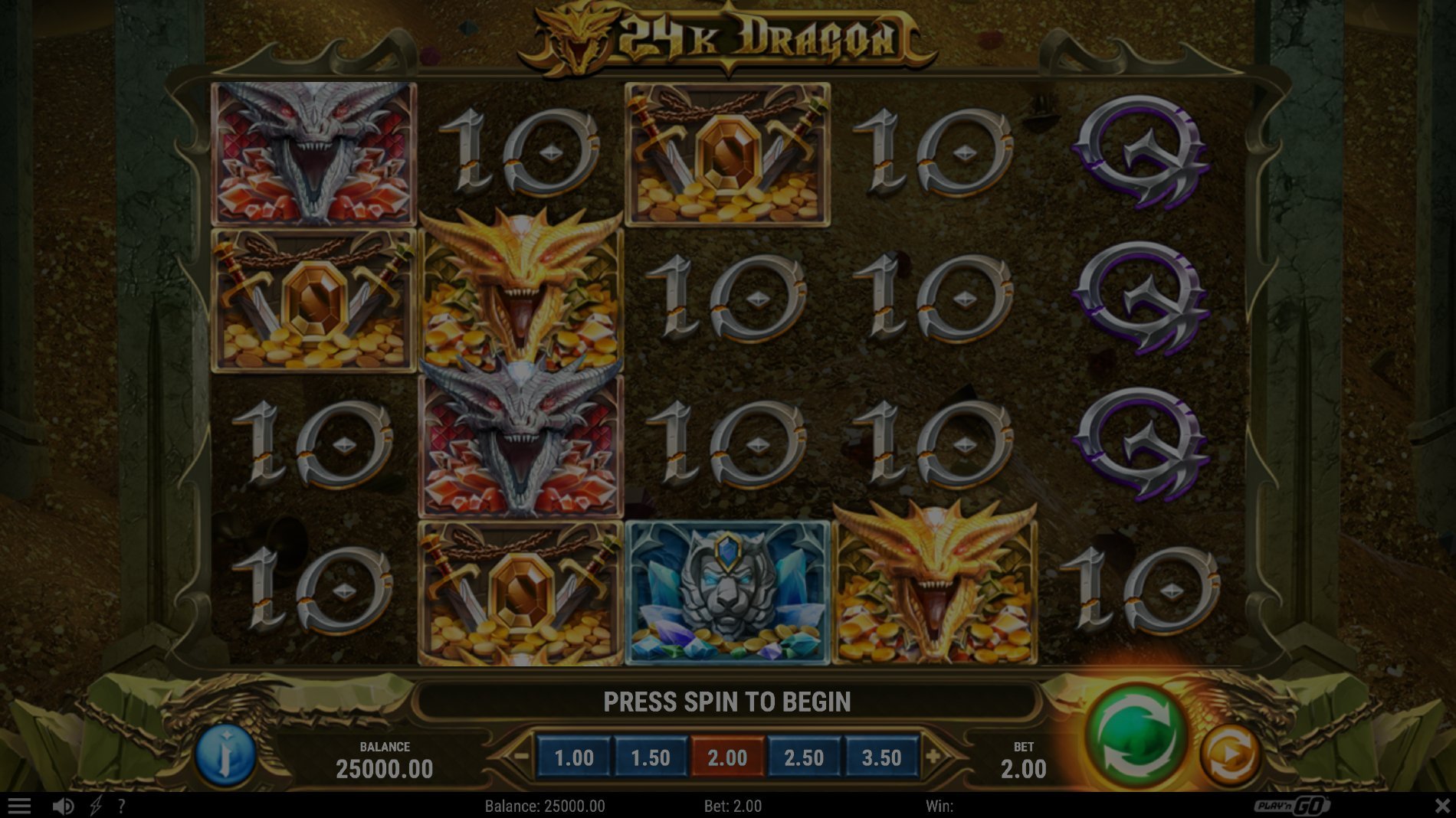 Contrary to what the title 24K Dragon suggests, this slot from Play’n GO does not involve fire-spitting dragons with 24 Karat gold or any overly mysterious attributes of such creatures. The 24K in its name references the amount of money you can win, which is up to 24,000x the total bet. Well, that’s pure gold!

The 24K Dragon slot tilts more towards the amazing payout than fires, dragons, and other mysterious creatures and events. However, one of the symbols is a dragon head and there is also a beast guarding the stockpile of coins and treasures. The game seems to be situated in a dragon’s lair that you have to tread carefully. It is a very volatile video slot, one that follows a storyline where players get the most chances to win big—though not frequently.

Play’n GO made a statement with 2020 outputs such as the Reactoonz 2 sequel, and the 24K dragon does not come short. The game has well-detailed graphics with classic action-themed soundtracks. All of these elements combine to give it a feel and scenery synonymous with stories like Game of Thrones or Lord of the Rings. The game involves a lot of captivating mechanics and animations, especially after winning.

In this game, players win when a spin produces at least three identical symbols in adjacent positions. The effect of the win depends on the class of symbols involved in the winning combination. We have the high-value icons (silver and gold dragons), low-paying card symbols (10 to Ace). There are premium symbols as well, such as the lion, green gem, and crossed swords. The high-value symbols can increase the payout by up to 5x and the premium icons by up to 2.5x.

Aside from the major play, players still have to look out for the Treasure Chest, Golden Dragon scatter, and Diamond scatter. They help in getting free spins and re-spins. Wilds are also featured, exclusively landing on reels 2, 3, and 4 and sometimes paying 2x or 4x your wager.

24K Respin: For you to activate this feature, the Golden Dragon scatter symbol has to appear on the reels. In such a case, 1 to 4 rows would be added to the reels. This exposes the player to more paylines but only for one respin.

Free Spins: You need at least three Diamond Scatter symbols on the reels. Three scatters lead to 8 free spins, while four or five scatters trigger 15 or 20 free spins respectively. This bonus can be activated as consecutively and as frequently as possible. The golden dragon heads, in addition, help to unlock more rows in the reels. Treasure chests also affect the payout by 2x or 4x. This effect is activated once the symbol is part of the combination.

24K Dragon is another Play’n GO game with very high variance and an RTP of 96.20%. Its winning potential of up to 24,000x makes it more than exciting for every slot lover to try out. As far as online casino games are concerned, it is the hallmark of high payouts.

24K Dragon has 5 reels with 4 rows, giving you 1,024 ways to win. You just have to match at least three symbols. This online slot created in 2020 is one that will surely stand the test of time and stand out of the pack. 24K Dragon also incorporates a dragon theme and some other elements of old-school fantasy and mystery stories, which makes it even more appealing. But it is important to note that the game’s high variance and wild multipliers do not make winning a guarantee. Players still have to engage with other tough elements of the game to win, but it’s a wonderful slot experience that you don’t want to miss.